A graphic design student who created a Play-Doh bakery to help distract children from technology has scooped a national award for her project.

University of Derby student Kate Fenton said she wanted to reintroduce Play-Doh to children to steer them away from computer gadgets so came up with the idea to create a Sweet Shoppe Bakery for one of her degree modules.

She submitted her designs to the POPAI Student Design Awards 2015, which recognise up-and-coming Point of Purchase (POP) creative talent in the UK and Ireland.

And, after pitching her designs to a panel of industry professionals at a Dragons’ Den-style event in London, she was awarded first prize, along with a cheque for £1,000. 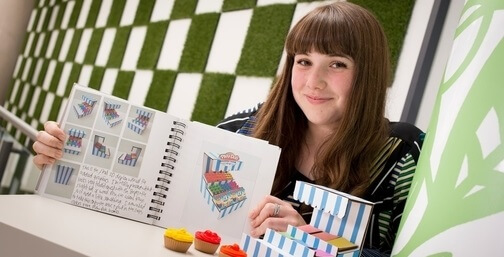 Kate said: “It's such an exciting prospect to know that winning the POPAI Student Awards 2015 has potentially opened more doors for me in the future.”

Entrants to the awards were invited to submit visuals for a striking display that would attract a shopper to make an impulse purchase for a product of their choice.

Kate said: “Over the past five years, kids have been more in touch with technology rather than creative materials.

“I noticed a side brand of Play-Doh called Sweet Shoppe. These sets of Play-Doh enable kids to make cakes, biscuits and ice cream. This led me on to design a Play-Doh Sweet Shoppe Bakery. The display, which would be placed at the front of the store, consists of having the Play-Doh cakes on display to distract children from computer games.

“I used food, particularly cakes, as a subject because every child loves them, so the aim was to give them a kick start to put down the computer gadgets and choose Play-Doh.”

Kate Fenton, along with Graphic Design students from the University of Derby, Phil Willan and Daniel Hollyoake, made the top five out of 70 entries.

The finalists were each given a five-minute slot to pitch their designs to a panel of experts.

Kate said: “When I received the email describing the event as Dragons’ Den-style, it made me really nervous. But when it came to my pitch time and I went in to the room the judges made me feel really at ease.

“A comment I received from head judge Nick Widdowson, Unilever's Merchandising Manager, was that my Play-Doh Sweet Shoppe Bakery display was ready to send off to Play-Doh. I couldn't believe it! It was such a compliment and a real confidence boost.

“From being given the POPAI brief at University to pitching my idea, this process has really opened my eyes to an industry I'd love to work in.”

Tracy Allanson-Smith, Senior Lecturer for BA (Hons) Graphic Design at the University of Derby, added: “The teaching team at the University are delighted that Kate Fenton’s designs have won the POPAI Student Design Awards 2015.

“Kate’s designs and her entrepreneurial research and presentation skills impressed the judges and have resulted in her well-deserved success.”

Kate has been invited to the annual POPAI Awards on Thursday, September 3, in London, where she will be presented with a trophy.

Chris Hayward, Head of Education at POPAI UK and Ireland, said: “The 2015 awards attracted an impressive 70 entries from 12 different universities with the final five being selected to attend a Dragons’ Den-style presentation.

“The finalists’ presentations and designs were of an exceptional standard with the judges struggling to select a winner.

“The winning design by Kate Fenton was well thought through, showed high levels of detail and answered all elements of the brief. Kate’s passion for the industry was clear through the research she had carried out and her presentation showed the development of her initial concept.”