Martial arts expert Charles Spring is fighting to make it easier for people with disabilities to take up the sport.

The University of Derby lecturer who teaches at the Buxton campus will join several hundred others taking part in a 24-hour martial art exhibition in Loughborough on February 7 and 8 to raise money for children who need specialist wheelchairs to participate. 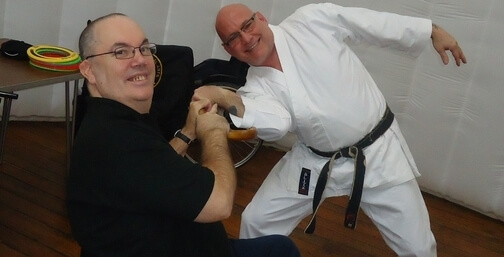 Charles, a black belt in both karate and kickboxing, said: "It will raise awareness of the fact that people with disabilities can do martial arts. It’s not just about getting the wheelchairs, it’s also for people who have sight problems, learning difficulties – all kinds of things.

“Martial arts teaches you lots of co-ordination skills, such as hand-eye co-ordination. It also gives you a lot of self-confidence, spatial awareness and social skills, as social interaction is a big part of joining a martial arts club.”

Charles said that Sport England’s policy of insisting that funding for every sport is dependent on its governing body including disabled people has had a positive effect in encouraging more work in this field.

Charles, who runs a dojo and training club, in Milford, near Belper, is a trustee of the Disability Martial Arts Association, which is organising the 24-hour charity event at Loughborough Community Aikido Club at Garendon Social Club, Loughborough.