University student bounces back from illness and scoops top award

A computing student who had to take two years out from his degree due to illness has won Student of the Year, organised by multinational company, CACI Network Services.

Matthew Gotheridge, who has Crohn’s disease, started the University of Derby’s BSc (Hons) Computer Networks and Security course in 2011.

But just one week after enrolling for the second year of his degree, he became seriously unwell.

Matthew, who was diagnosed with Crohn’s at the age of 14, was rushed into the Royal Derby Hospital where he underwent emergency surgery on his bowel.

Following a week in intensive care and a further two months in hospital, he was forced to postpone his studies for two years while he recovered.

Now, the 27-year-old, of Langley Mill, has been named Student of the Year for his course.

Matthew was presented with a trophy and a cheque for £750 at an awards ceremony held at the University, after being selected by programme leader Dr Shao Ying Zhu.

She said: “Matthew is a polite and hardworking student. He has been chosen for the Student of the Year award due to his excellence in academic performance.

“I wish him continued success in the future.”

Matthew, who is near to completing the second year of his course, added: “To come back after two years out and win this award is extra special for me. 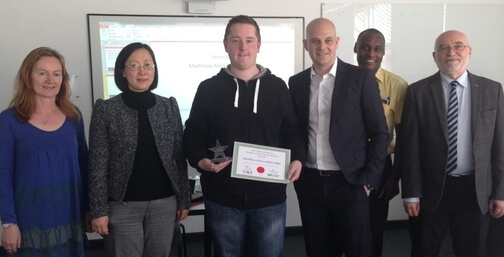 “It was a surprise to get the award but I was really pleased.

“Everyone at the University has been incredibly understanding and supportive throughout my studies.

The awards were organised by CACI Network Services, a leading enterprise networks and telecommunications solutions provider, who started a partnership agreement with the University last August.

This is the first time the award has been presented at the University of Derby.

Stuart Hylton, recruitment manager at CACI Network Services, said: “We embarked on setting up a graduate scheme so we could populate support teams across our business and find superstars of the future.

“We chose the specific course at the University of Derby as we have had employees working here from it but we had no formal arrangement or partnership in order to attract the graduates in.

“With our growth and new requirements in our government practice, we now envisage that we will be seeking 6-10 graduates a year for the foreseeable future, and a partnership with Derby's course and other universities in the UK will be a fruitful way of recruiting.”