Are home comforts the key to victory for University of Derby badminton team?

In a little over two weeks, the University of Derby’s ‘Team Derby’ will take on Milton Keynes Badminton in their first National Badminton League (NBL) home game.

The new £30.8 million Derby Arena at Pride Park, which officially opens on Friday, March 20, will host the match on Monday, March 23 in front of over 1,000 fans.

Donna Kellogg MBE hopes that playing at home will give the team new energy: “Team Derby currently sit fifth position in the league after winning one of our three away games. Playing on home ground at the new world-class Derby Arena will be important in showing the team’s true character to bounce-back again. 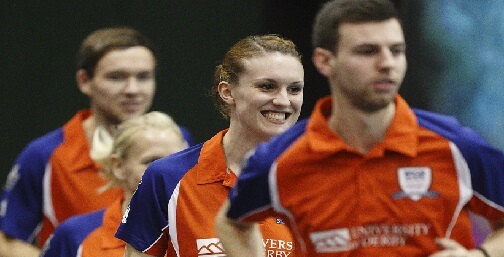 Sky Sports will screen the action live on March 23 whilst sports fans worldwide will be able to view the second home game through online streaming when Team Derby play against the University of Nottingham Sport on Monday, April 27.

General sale tickets are available for the matches with prices ranging from £4.50 to £10. Students, senior citizens and children under the age of 16 can get tickets for £5.