A 3D audio and visual installation of starlings created by University of Derby College of Arts staff has been showcased on BBC’s Autumnwatch Extra.

The 13-minute installation, called The Shape of My Thoughts, is a multimedia project which shows flocks of animated starlings moving in synchronisation to music.

The piece was first presented at the University’s Nature Connections Festival in September 2015.

It was spotted by Chris Packham, a presenter on Autumnwatch and host of the University festival, who asked if it could be featured as part of the BBC Autumnwatch 2015 season.

And yesterday (Tuesday, November 3), the work was aired on the popular afternoon nature programme.

Michael Brown, Programme Leader for BA (Hons) Popular Music with Music Technology at the University and one of the music composers for the piece, said: “We are very pleased that the work has generated so much interest and the broadcast by the BBC will hopefully serve to bring it to a wider audience.”

“It was an extremely rewarding and informative experience for all involved.”

The work was a College of Arts research collaboration between animators and musicians at the University of Derby featuring improvisational vocal performances by second-year student Hayley Thorpe.

The team were inspired by the idea of asserting control over an animated flock of birds and imaging with music that could represent the flock as it moved around an artificial installation.

The initial ideas were supported by the sentiment expressed within a short story aired on BBC Radio 2 as part of a 500-word competition in 2013 by Roxy Toyne, then aged nine, called The Starlings of West Pier.

Michael added: “We wanted to produce a three-dimensional immersive audio and visual experience for people to watch. The starling murmurations were a shared source of inspiration for the artists involved. This natural event, which most often occurs in the autumn season in England, can involve flocks of thousands of birds involved in aerial displays creating a sensation of almost choreographic formations.”

The BBC Autumnwatch filming crew spent six hours at the University taking footage for the programme.

The episode featured Michael Brown talking about the piece and explaining how the music was produced to create an immersive experience.

Michael added: “Nerves were present throughout the filming experience but the BBC Autumnwatch crew were very professional, supportive, imaginative and patient with us.”

Professor Chris White, Head of Department for Media and Performing Arts at the University of Derby, said: “This work impressed Chris Packham so much when he came for our two day Nature Connections Festival and it is a credit to the research and practice in the College of Arts that it has made such a strong impression. It is a further demonstration of how opportunities for students in the college are linked to our academic staff practice and research to create beautiful and thought-provoking work.” 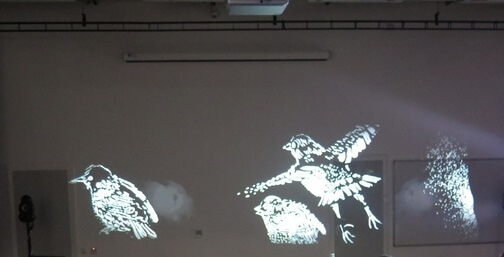 The Shape of My Thoughts is intended to be the first of three installations exploring the expression of narrative design through the relationship between animation and music.

A second piece, called Snowbird, is planned for 2015-2016 and will investigate the longing for travel inspired by The Snow Geese by William Fiennes.

In 2016-17, a third installation is planned to be showcased to coincide with the First World War centenary. The piece, titled Blindsight, will draw upon the stories of WW1 pigeons’ homing instincts used to send messages from the trenches.

All College of Arts programmes can be found at www.derby.ac.uk/arts.