Four students from the University of Derby have been selected to showcase their final-degree projects at the annual Derby Property Summit.

Tomas Gurcinas, Dmitrijs Sulojevs, Chris Cunningham and Jose Andre, who are studying undergraduate and postgraduate architectural courses, have been head-hunted by Marketing Derby, which organises the event, to present their work on regenerating challenging sites in the city centre.

Around 400 senior-level delegates from the regeneration, property and developer communities will be at the event, which will be held on Wednesday (June 24) at the iPro Stadium, Derby.

The Summit will discuss how the Midlands can avoid being squeezed between the South East and Northern powerhouses and will focus on a number of key issues integral to the region’s growth, including how Derby can achieve the next steps in the city centre’s masterplan.

Tomas Gurcinas, who studied a BA (Hons) Interior Architecture and Venue Design at the University of Derby, will be exhibiting his work, called Regeneration of Sadler’s Square.

The 34-year-old, who scooped a Dean’s Prize for Best in Show Award at the University’s Big Show, said: “The first stage of my project was to propose a regeneration plan for the area. The second stage was to come up with a new design scheme for one chosen building on the site and I selected to propose refurbishment of Middleton House, in St Mary’s Gate. 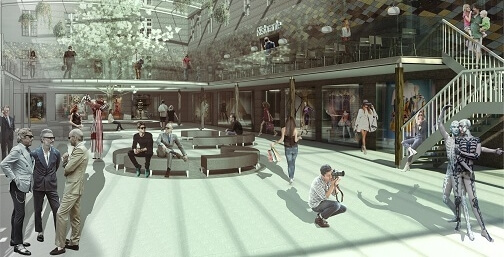 “The final part was place making. I created the vision of having an internal courtyard, which is conceptually original and fresh, inspiring and functional.

“I would like to say many thanks to the University of Derby and Marketing Derby for the opportunity to showcase my work at the Derby Property Summit. I believe it is one of the best opportunities to sell and market myself as a new designer.”

The event will bring together key industry speakers and city leaders, including Jane Duncan, President Elect at the Royal Institute of British Architects (RIBA) and Adam Challis, Head of Residential Research at JLL.

Dr Boris Ceranic, Senior Academic and Programme Leader of BSc and MSc architectural courses at the University of Derby, said: “Exposure to more than 300 property professionals at the event will be a great opportunity for the students to display their work to a large audience.

“The philosophical stance of our architectural programmes is inspired by its locality, being relevant to the city we belong to, its local communities and people. We closely collaborate with local authorities and industry on a wide range of challenging and relevant choices of live projects.

“These are related to real sites and buildings in Derby, often in significant need of regeneration and requiring not only place making and public realm improvements, but dealing with challenges of their socio-economic, environmental, cultural and heritage context too.”

John Forkin, Managing Director of Marketing Derby, added: “Each year we feel it important to have a key event which puts Derby at the centre of the property community. This attracts professionals from all over the country and gives us an opportunity to showcase the city’s development to date and future investment opportunities.

“The Summit has now become an important event in the calendar, attracting speakers of national prominence such as the President Elect of RIBA, Jane Duncan.”