Every police officer in Malaysia will have their training accredited by the University of Derby, in what is thought to be the first ever such partnership between a foreign country and a UK university.

As part of its drive to achieve developed nation status by 2020, Malaysia, in South-East Asia, is looking for every one of the 113,000-plus officers in its Royal Malaysia Police (RMP) to have an accredited academic qualification, which will be in addition to their official police rank. It is hoped this will increase the RMP’s professionalism.

Derby is thought to be the first UK university to become the academic awarding body for an entire country’s police force.

The new agreement has been struck by the University’s Department of Law and Criminology, and the Malaysian government.

Under the new agreement the University will accredit the training of all police officers, having created three qualifications for different ranks: a Diploma in Policing for new recruits and existing Constables, a BSc (Hons) Police Science degree course for Sergeants, and a Postgraduate Certificate in Police Leadership for Inspector level and above.

Officers will receive training in areas such as the law, investigation and interview techniques, suspects’ rights, management, leadership and administration; with the instruction delivered by police trainers in Malaysia but overseen and quality controlled by expert Derby tutors.

The first graduation ceremonies recently took place at the RMP College in Kuala Lumpur where 1,067 constables received their Diploma in Policing from representatives of the University, alongside Inspector-General of Police, Tan Sri Khalid Abu Bakar, over three days of celebrations. A further 1,574 officers received their award in absence, as they were posted on duty. 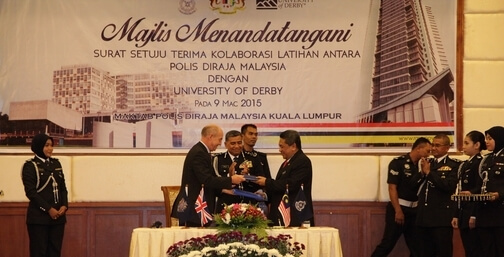 Professor Malcolm Todd, Dean of the College of Law, Humanities and Social Sciences, said: “I am delighted that the University of Derby has entered into this highly prestigious partnership with the Royal Malaysian Police to deliver world class police training.”

Kevin Bampton, Head of the Department of Law and Criminology at Derby, said: “We believe it’s the first time a UK university has done something of this nature.

“It is an enormous task, training tens of thousands of officers per year, but the Malaysians are committed to embedding the highest professional standards and we are here to support them. Malaysian criminal law draws inspiration from UK law, but it has been highly effective in making it relevant to a complex and sophisticated multi-ethnic society. We have much to learn from them.

“We are excited to be working with the Malaysians, providing the academic support and independent quality assurance which will further professionalise the country’s police force.”