A group of aspiring police officers have put forward their solutions to tackle a host of serious community issues as part of a bespoke University of Derby cadets training course.

Thirty-five police cadets have spent the last 12 months working with community groups and authorities to come up with projects to stamp out domestic burglary, dog fouling, the theft of Asian gold, anti-social behaviour, bike thefts and drug misuse.

It comes as part of an assessment in achieving a Foundation in Policing – a unique qualification specially designed by the University of Derby for Nottinghamshire Police Cadets.

Former police officer Mark Flint-Freel, who is now a lecturer in Criminology and Policing Studies at the University of Derby, said: “Having designed and delivered this project from day one, the event was a very proud moment for me. My colleague said to me I was like a proud Dad and honestly that’s the way I felt.

“Every cadet team put in so much effort and dedicated so much of their own time to produce their work and I am so pleased with their results.”

The Foundation in Policing course was written and designed by Mark Flint-Freel, in close partnership with Nottinghamshire Police.

The force approached the University in 2013 to assist in delivering their cadet programme and, in August 2014, the University launched the first Police Cadet Summer School – a one-week residential course where cadets attended crime scenes, road traffic collisions, wrote statements and made mock arrests. 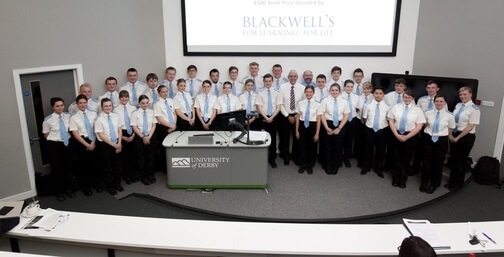 Due to the success of the event, Nottinghamshire Police wanted the University to accredit and qualify a bespoke training course so that when cadets leave they could achieve a recognised qualification unique to the force and University.

It also included a project presentation, which involved teams of cadets from across Nottinghamshire, and was held at the University in front of the cadets’ parents.

The cadets presented their work to a judging panel made up of Kevin Bampton, Head of the Department of Law and Criminology at the University, Dr Philip Hodgson, Head of Criminology, Julie Berry, Force Cadet Lead for Nottinghamshire Police, and Chief Inspector Richard Stapleford.

Julie Berry said: “This has been a fabulous event, celebrating the hard work and dedication of the Nottinghamshire Police cadets. We are all very proud of everything they have achieved.”

The winning cadet team, from Bestwood, concentrated their efforts on tackling dog fouling. They set clear objectives and used the police problem solving model SARA (Scanning Analysis Response and Assessment) to come up with a solution.

They measured the success of the project by reducing the amount of dog fouling, identifying the culprits and advising dog owners of the need to clean up.

The team won a £500 voucher to spend at Blackwells bookshop at the University’s Kedleston Road campus.

Mark added: “Blackwells contribution, their prize of £500, was brilliant and, as a main part of research and partner to the University, we thought their help was amazing.”

Dr Philip Hodgson said: “Our partnership between The University of Derby and Nottingham Police has gone from strength to strength and, through working in collaboration like this, we can achieve great results.

“University research is an important factor and, by teaching cadets at the earliest opportunity to understand the importance of evidence based work, considering the needs of communities and using problem solving methodologies, we can see the effects and benefits.”