A University of Derby graduate, who suffered a broken leg after being involved in a motorbike accident, has praised the Clearing system for helping to get his “education back on track”.

Adam Green, 22, was left with a broken leg following a crash while he was studying for his AS-levels.

He missed half a year of classes through the recovery process which meant when he received his A-level results, his grades were lower than expected. 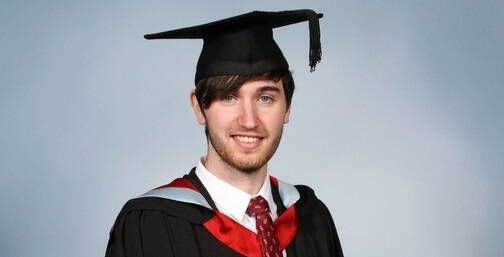 Adam applied to study a BSc (Hons) Geology degree at the University of Derby through Clearing and graduated with First Class Honours.

He said: “My A-level prospects were severely restrained after my accident.

“I was on the fence about going to university in the first place but I filled out the UCAS application anyway and picked some optimistic choices that were quick to deny me when results day came round. I decided to take a chance and entered the Clearing process.”

Adam, who studied Geology, Archaeology and Physics at A-level at Aquinas College, in Stockport, contacted the University of Derby and was offered a place.

He said: “I was adamant that the only course I would do at university was Geology as that was my favourite subject and the only one I still managed to do well in. When I saw Derby’s Geology degree available I immediately applied.

“I talked to Professor Hugh Rollinson, Head of Geoscience at the University, when I initially called and he was very supportive and clear with his instructions. An induction pack was sent shortly after and that was all the support I needed.”

Adam is now studying an MSc in Structural Geology with Geophysics at the University of Leeds and hopes to pursue a career in the petroleum industry.

He added: “The University of Derby allowed me to get my education back on track to achieve my full potential and for that I am extremely grateful. The abundance of field trips are what made my course so great as they put everything into context we were learning about in lectures.

“My advice to prospective students coming through Clearing is to not be afraid to make quick decisions. You will have to make big decisions in a short space of time but for me it has been totally worth it.”

Dr Adrian Watson, Senior Lecturer in Geology at the University of Derby, said: “I was Adam’s programme leader and project supervisor during his time here.

“Adam developed into a fantastic field geologist who excelled at producing field maps.

“A Geology degree at Derby will provide you with a practical-based degree, with a strong emphasis on fieldwork and lab work.”