University of Derby graduate Andy Bright has secured a job at top London hotel Claridge’s where clients are going wild for a taste of the country in the heart of the city.

Andy, who gained a first class honours degree in Professional Culinary Arts last year, starts soon as a demi chef de partie in the kitchens at the Fera at Claridge’s restaurant, run by top chef Simon Rogan, in the legendary hotel.

The 24-year-old from Hexham, who describes himself as a country boy at heart, will feel right at home - the kitchen is green with living plants cropped only when they are ready to go into the pot. 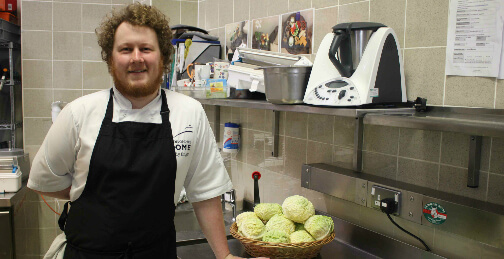 The name Fera, which means ‘wild’ in Latin, reflects both the primal influence of nature and the highly seasonal ingredients favoured in Simon’s cooking. His intuition for food is matched by exacting technical skills, evident in the successes of his other restaurants, including L’Enclume in Cartmel (where he holds two Michelin stars), and The French in Manchester.

“When I went into the kitchen it was like a jungle,” said Andy, who spent two weeks on work experience at Claridge’s. “Each section has shelves with herbs growing on them which they cut as the dishes are going out. They even have these cool growing pods which simulate ideal weather conditions and the rhythm of night and day.”

Simon Rogan’s farms deliver daily to Fera at Claridge’s: “You get the freshest taste of the countryside in the middle of London,” said Andy, who currently works at the Devonshire Dome’s Café and Restaurant . “I’m a bit of a country boy, but London is where it’s all happening.”

Andy started studying at the University of Derby’s Buxton Campus  on a Foundation degree but was chosen by Dr Sarah Rawlinson, Head of the Department of Hotel, Resort and Spa Management for sponsorship to top up his qualifications to a full Bachelor’s degree.

Dr Rawlinson added: "I would like to congratulate Andy on his successful appointment. He is an incredibly talented chef who has a passion for food which he has shared with University visitors through his executive lunch menus, which staff call the "Andy Bright Special."