Nationwide search is on for the UK’s best young adventurers

A national search for the UK’s most adventurous youngsters has been launched by the University of Derby.

Nominations are now open for the awards, which aim to recognise youngsters who excel at adventure sports and push boundaries to reach their potential.

Each entry will be assessed by a panel of judges, with the winners being announced at a special awards ceremony held at the University’s Oaklands Manor Outdoor Leadership Centre, in the Peak District, on Saturday, October 10.

Professor Nick Draper, Head of the Department of Life Sciences at the University of Derby, has been involved in organising the event.

He said: “Until we started our Young Adventurers Award in 2013, there appeared to be no regional or national scheme running in the UK that focused on young people and their achievements in the adventure sports.

“We have been proud to be associated with the awards, which moved in 2014 to become a National Award scheme.

“At a time when Britain has been referred to as the lazy nation of Europe, it is wonderful to see the quality of the nominees and award winners in each year.

“Britain has some wonderful Young Adventurers, of whom we should be very proud, and the University of Derby along with the Sport, Outdoor and Exercise Team are delighted to be associated with this celebration of achievement.” 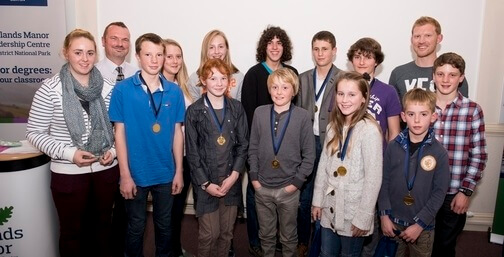 Shauna Coxsey, Head Coach for the RAF Climbing Team and winner of two World Cup Golds for Bouldering, is the guest speaker for the awards ceremony.

The winners of the Team of the Year category will receive one GoPro HERO for their group.

The 10-year-old, who attends Denstone College Preparatory School and Nursery at Smallwood Manor, is currently the British Champion in Speed Skating.
In July, he will be in London to defend his title and will be competing in an international event in Zandvoorde, Belgium, in August.

Finnbarr said: “I was proud to get the award but also very surprised as there were so many other amazing children nominated.”

Finnbarr’s mum Charlotte added: “I nominated Finnbarr because of his tireless enthusiasm to train and improve on his performance. He always pushes himself that little bit further and never gives up.

“I was delighted for him when he won the award, to have acknowledgement of his hard work and training is fantastic and he's only 10 years old.”

To enter, all you have to do is tell us why you want to nominate your son, daughter, young relative, friend or classmate, student or club member, fellow team member or even yourself.