Courage in war and a love story which crossed enemy lines are all part of the true tale of Deborah the Tank, which will be revealed in a University of Derby public lecture by the man who wouldn’t exist if it hadn’t all happened.

In From Dark Tourism to Light Tourism: The Story of Deborah the Tank, Tourism Lecturer Tim Heap will describe how Deborah was commanded by his grandfather Frank in what was at the time the biggest battle ever to involve tanks, at Cambrai in 1917.

How Tim’s family came to find out that the tank had been dug up by a French enthusiast is a tale of fascinating coincidences which will fittingly become clear on Armistice Day, November 11, at 6pm in Buxton’s Devonshire Dome. 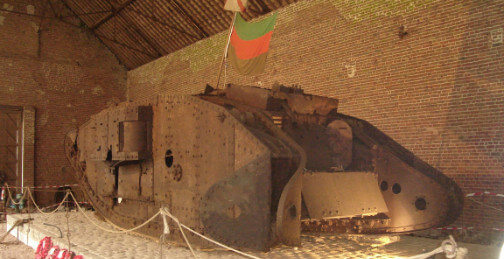 How Deborah has now become a grand old lady with a new home and a new role in promoting peace is an example of tourism in action.

But how Tim ended up with one grandfather who won the British Military Cross and another who was awarded Germany’s Iron Cross is part of a romance which united two warring nations in one love story.

The University of Derby is well respected for its studies of Dark Tourism – how from the earliest pilgrimages to holy shrines right up to today’s Whitby Goth Weekend people visit sites associated with death and mystery.

But Tim said his talk would be the other side of the coin: “Dark Tourism is all about death and destruction, but what Deborah is about is light, hope and friendship. The stories of these people can never die.”