Homeless people in Derby were treated to a festive Christmas meal last night (Thursday, December 17), with a little help from the University of Derby and one inspiring student.

Project TouchDown, which helps individuals in the city by providing clothes, shelter and food, received a Christmas gift of £300 from the University’s Community Fund, in its latest round of funding for local community projects.

Zishan Fazal, who studies at the University of Derby and started the initiative, said: “Project TouchDown is all about supporting the homeless and the needy, who are either sleeping on the street, or who need extra food or clothes.

“I’d like to bring the community together as one; humanity is about sticking by one another and offering support. You never know when you’ll need help yourself.

“The idea came to me one night when I was studying late and decided to go to McDonalds. I saw a homeless man sitting outside and so I decided to have a chat with him. He told me his story about how he ended up on the street and so I decided to do something to help. I went from there and started the project in October last year (2014).

“I think everyone needs help in one way or another. Some people need food, others need housing. What we can do is help with food, clothes and somewhere to stay. Everyone has a need and we need to listen to each other. 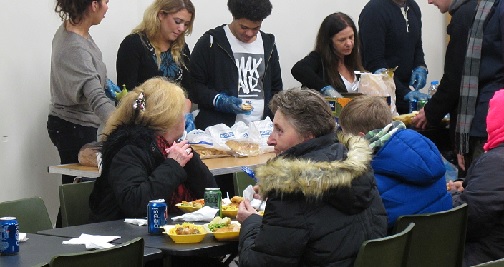 “We run sessions for the homeless every Thursday but this event is the second of its type that we’ve done. The first one was during Eid and I decided to celebrate it with the homeless and needy. My family doesn’t celebrate Christmas, but I thought it would be nice to help the homeless celebrate it. So last night we prepared a Christmas meal to make them feel like they’re really celebrating it. We also gave out presents, sleeping bags and clothes.

“We had about 20 volunteers helping out last night, but there are loads of other people who play their part, donating food and money - even dropping off the food. I’d have to say, without them this project would be nothing.

“The University of Derby’s Community Fund has helped us out quite a bit on this project. I’ve been able to order some more food, disposable plates, extra sleeping bags and coats. The money will also help towards our regular sessions, which we run every Thursday, so that money has been a big help.”

Rosie Marshalsay, Head of External Relations at the University of Derby, added: “Project TouchDown is a fantastic example of community support in Derby. This time of year is about giving back, especially to those who are less fortunate, and we’re happy to have helped spread some Christmas cheer.

“The Community Fund has helped more than 20 organisations across the region over the last year and we’ve another £10,000 this year to continue supporting these inspiring local community initiatives.”

The Enthusiasm Trust in Allenton, Derby, was also awarded £500 from the University’s Community Fund. Enthusiasm supports disadvantaged young people through a range of services including mentoring, education provision, and youth clubs and volunteering projects.

Enthusiasm will use the money to build a football club project which will promote healthy activity to young people, embed discipline and reliability of turning up to football practice on a regular basis, and provide a sense of being part of a team.

The Community Fund is just one of the ways in which the University of Derby hopes to give back to local people by handing out grants to inspiring projects that seek to benefit the community in some way.