Martial artist and University of Derby sport lecturer Charles Spring has taken a national karate title after a 22-year break from competitions.

Fifty-three-year-old Charles competed at international level in his 20s and 30s, but was forced to stop after a bad injury meant he would not be able to take part again. 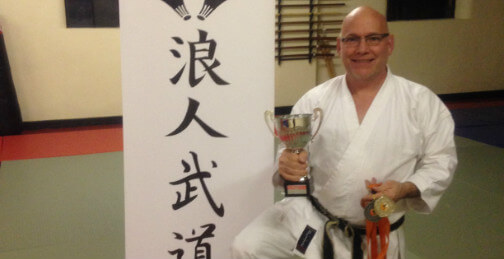 Now, he has won the English Revolutions tournament Traditional Kata Championship in the over 45’s category in his first year back, plus a silver medal at the English Championship for his sword kata, a sequence of combat-related moves put into a pattern.

Charles said: “When I used to compete it was not often you saw anyone over the age of 35 at competitions but now the older age groups can be some of the larger sections at many tournaments, alongside the children’s groups.

“It is very competitive and an excellent reason to keep fit and get you back in shape.”

Charles is pictured here at the Kawagishi Dojo (training Hall) in Milford with his trophy and medals from this year’s competitions. He has Karate and Kickboxing classes in Belper and Milford.