The Duke of Devonshire has praised the University of Derby for rescuing one of Chesterfield’s best-loved buildings.

Generations of Chesterfield women owe their start in life to an education at the former St Helena’s Grammar School on Sheffield Road, which will open as the University’s new campus in September 2016.

The Duke, who is the University’s Chancellor, said: “What a rescue. “It is very, very exciting. It’s immensely worthwhile and will be great for the University and Chesterfield,”

The Duke had a tour of the Victorian red-brick building, whose light and airy corridors and classrooms provided a pioneering design for schools which was widely admired across Europe and America. 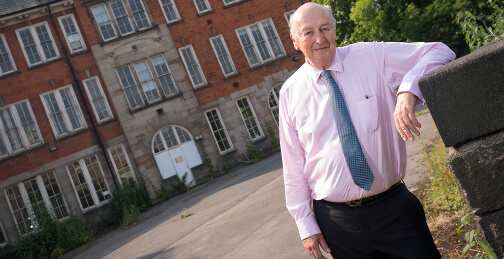 The Duke’s, ancestor, the ninth Duke, officially opened the building in 1911.

The Duke heard how the University’s Nursing courses, run in collaboration with Chesterfield Royal Hospital, will move into the listed building, complete with a mock ward containing robot or “sim” patients that simulate human responses to treatment.

There will also be Engineering and Computing classes, plus a suite of offices which will be used as business incubator units for the town’s entrepreneurs.

Most of the original features and lay-outs will be retained, although the former indoor netball court will become the main entrance. The only part of the existing building which is in need of demolition is a small extension built in the 1960s.

“The way it is going to be modernised while keeping the best of the old seems to be very much the way in which the University maximised the benefit of the Devonshire Dome at Buxton,” the Duke added.

The University has been training local people to work in Nursing and Health Care for many years. The NHS has found that training people locally means they are more likely to stay in their home town, which has meant Chesterfield Royal Hospital has retained excellent, local staff.

This emphasis on training for local people will not only help to meet demand for highly-trained workers, but also keep their spending power within the Chesterfield economy.