The University of Derby’s franchise badminton team, coached by Donna Kellogg MBE and led by captain Rajiv Ouseph, had earlier beaten University of Nottingham Sport in the Play-Off semi-finals.

The UK’s first badminton league culminated at the K2 Crawley, Sussex with Ouseph’s win in the men’s singles setting up a Championship finale where Team Derby secured the 3-2 win against Loughborough Sport in the final event.

Ouseph had only returned to the UK on Saturday from the Indonesian Open after a month-long series of international tournaments. But the England No 1 adapted superbly to the first-to-nine scoring system to beat Sweden’s Henri Hurskainen 3-1.

Chris Coles and Andy Ellis won in the men’s doubles while Karin Schnaase, Germany’s No 1, came out on top in the final women’s singles match, paving the way for Team Derby’s victory. 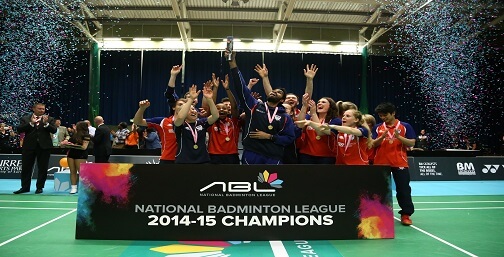 Speaking after the win, Donna Kellogg said: “To win the NBL title is absolutely fantastic. When we first agreed to be one of the franchise teams it was the dream to be crowned champions.

"Our supporters have been amazing throughout the season and the players have shown great commitment and determination on court and that really paid off in the finals.”

Ollie Shearer, Team Derby Franchise Director at the University of Derby, added: “The final was very close and Loughborough pushed us all the way. We were confident we could challenge for the title the moment we became a founding franchise.

“There are some high profile sporting universities in the league but I've always said if we are put on a level playing field we could show how strong Derby are. To be crowned champions is a testament to everyone involved and a sign of things to come from Derby.”