University hosts awards to sports stars of the future

Sports stars of the future shared nearly £2,000 in grants to help them compete nationally and internationally at a presentation hosted by the University of Derby at its Buxton campus.

Welcoming them to the campus, University lecturer in sports anatomy Adam Baker congratulated them on their sporting achievements, and outlined how these could be translated into full-time careers through Derby’s wide range of degree courses.

The chosen 11 athletes, aged between 13 and 21 and all from the High Peak,  have been selected to receive a grant of up to £250 each, which they can use to help meet costs such as travel, equipment, coaching fees or competition costs.

All are tipped for further success, and are either already competing for England or Great Britain or are part of recognised national development squads or club academy structures.

Each also won free access to an activity card by   leisure centres across the Borough courtesy of Places for People Leisure Management. 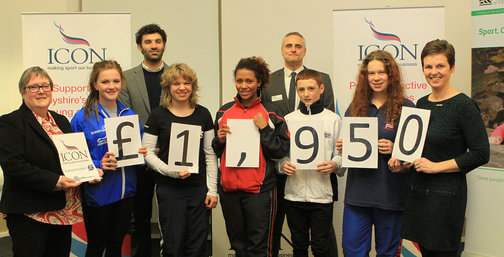 Cllr Caitlin Bisknell, Leader of High Peak Borough Council, and Hayley Lever, Director of Derbyshire Sport which organises the ICON programme, congratulated some of the athletes during a presentation at the University of Derby Buxton.

Those athletes will hope to follow medal winners at last summer’s Commonwealth Games, Adam Peaty and Liam Pitchford, in using ICON support to reach the top of their chosen sports.

“It would be great to think that there are other ICON athletes from the area who could follow in the footsteps of Adam and Liam by achieving success at the top level,” said Cllr Bisknell.

Ten local authorities across the county are members of ICON, which was set up by Derbyshire Sport to help create a lasting legacy from London 2012 in Derbyshire. Other members of the programme include the University of Derby and Derbyshire and Nottinghamshire Chamber of Commerce.