Girl Guides and Brownies in the High Peak have been getting the point that there is more to sword fencing than fighting, thanks to a pioneering course run by University of Derby sports students.

Youngsters across the area have been taught the sport by Foundation Degree Sports Coaching undergraduates from the Buxton campus under a new scheme called ‘Go Fence’, which has an emphasis on team-work.

First and second year students have been giving lessons to Guiding movement groups  three or four times a week in towns and villages as far afield as Buxton,  Bakewell, Hathersage and New Mills.

“The most successful project was the fencing, but the wider aspects of it are community, team-work and decision-making,” said their lecturer Dave Canham, Senior Lecturer in Sport Coaching. 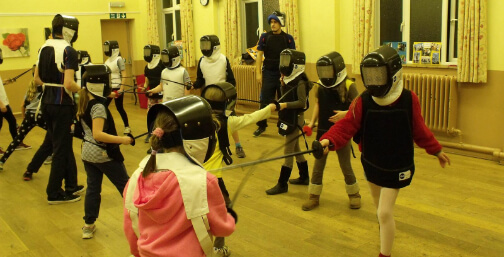 “For me it’s about leadership as well. The kids have a go at fencing but they also learn how to manage their environment – such as the refeering, organising contests and the need for everything to be safe.

“I’ve tried to deliver it in an exciting and unique way - the second years became supervisors and leaders and the first years the workforce.”

The Buxton students have received nothing but praise from Guide leaders for their achievements. “The enthusiasm from the students was wonderful,” said Guide Area Events Co-Ordinator Chris Connelly. “We’ve worked with professionals who are less organised than these young people.”

One of the leaders of the Brownies in Burbage, Buxton, added: “I would like to say a huge thank you to everyone who helped organise Go Fence for Burbage Brownies.

“The evening was brilliant and very well run, which all the girls thoroughly enjoyed. I have had loads of positive feedback and thanks from parents too.”