Students are hoping to hit the right note as they perform at the University of Derby’s Big Show Music Showcase tomorrow night (May 15) at Derby Theatre.

The live concert, which starts at 7.30pm, features a diverse mix of rock, pop and acoustic music from students on the University’s Popular Music and Music Technology course.

It is the first event kick-starting The Big Show – a series of live events and exhibitions across Derby exhibiting the very best of emerging talent from the University’s College of Arts and College of Engineering and Technology.

Seven bands will be performing at Derby Theatre tomorrow evening before headline act Fahran – a band featuring two University of Derby graduates – take to the stage.

The group, which was inspired by the likes of Queen, Iron Maiden, Thin Lizzy and Black Stone Cherry, formed in 2011.

Since then, the band has gone on to play at BT London Live in Hyde Park, as part of the London 2012 Olympic celebrations, as well as performing at Download Festival and Bloodstock Festival.

Band member Jake Graham, who graduated with a First Class Honours in Popular Music with Music Technology last year, said: “We all can't wait to play at the Music Showcase. We performed last year as well and are so happy to be asked back again this year.

“We're always gigging so we are prepared and eager to get on that big stage. We will be playing the best of our two albums and look forward to everyone hearing it live.”

Also playing at the showcase will be indie funk band Errbie. The band, which is made up of five Derby students, will be performing four songs.

Guitarist Nathan Robertson, who is a second-year student on the BA (Hons) Popular Music with Music Technology degree, said: “We always look forward to playing but we are a little bit nervous about this performance as it will be in front of talented musicians, who are a difficult crowd to please. 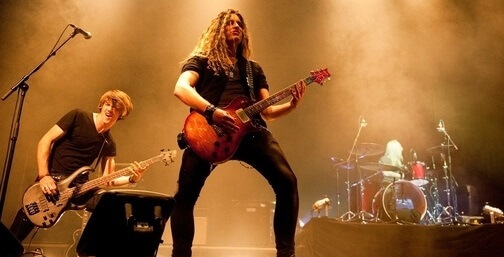 “It is a great opportunity for us to showcase what we have been working on, especially as we are second-year students.”

On Saturday (16), students from the University will be supporting The Open Road and Guests, a band including University lecturer Phil Baggaley, at Derby Theatre.

The Open Road is a unique collective of singers, songwriters, friends and musicians from the East Midlands who will be performing a mix of acoustic folk-influenced music.

Tickets to the performance cost £10 and include a free copy of The Open Road's latest EP Kingfisher Blue.

Phil Baggaley, BA (Hons) Popular Music and Music Technology lecturer, said: “We are all very much looking forward to our Music Showcase at Derby Theatre.

“It features a wide variety of styles of music brought to you by some of the most talented musicians on the Popular Music course here in Derby. We hope you can join us for what should be a great night!”