A group of thirty-five teenagers have graduated from a bespoke University of Derby police cadet training programme.

Over the past two years, the cadets have been working to achieve a Foundation in Policing – a unique qualification specially designed by the University of Derby for Nottinghamshire Police cadets.

The first cohort of cadets have now graduated from the course, which was written and designed by Mark Flint-Freel, in close partnership with Nottinghamshire Police, during a special passing out parade at the University. 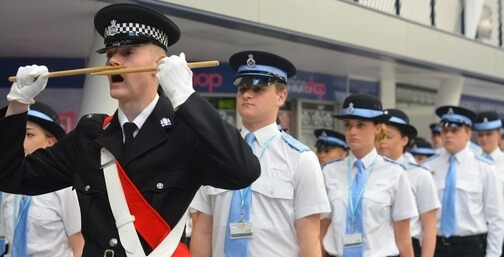 Mark, who is a former police officer and now a lecturer in Criminology and Policing Studies at the University of Derby, said: “When our police cadet project first started in 2013, we hoped that we would be able deliver something exciting, something new that would hold a young person’s attention but still give them the skills and abilities to further their chosen policing career path.

In May 2013, the University formed a strong partnership with Nottinghamshire Police and together they developed the first accredited qualification for police cadets.

In order for cadets to achieve the qualification, they are assessed through formative exams, an evidence-based policing project and a final written paper.

The course is closely linked to the College of Policing qualification, the Certificate in Knowledge of Policing, which gives cadets a clear pathway of study should they wish to become a police officer in the future.

The ‘passing out’ event – a ceremonial parade of cadets who have completed their training – saw the cadets march through the University in front of friends and family.

At the event, the police cadets were presented with a course certificate by Chris Eyre, Chief Constable of Nottinghamshire Police, Police Cadet Co-ordinator Julie Berry and Dr Philip Hodgson, Head of Criminology at the University of Derby.

Mark said: “The University is very proud of our strong links with Nottinghamshire Police.

“It is through partnerships like this that our University is becoming the place to come to if you want to study for a policing career.”