A fashion student at the University of Derby said she was “overwhelmed” after her womenswear collection was selected for an award by a panel of judges including a top Prada designer.

Based on her interpretation of the arts and crafts movement, it showcases elements of chunky knitwear, crochet and disproportional lines.

On Wednesday evening (June 3), at the University’s Big Show Fashion Show held at Derby Theatre, Elyse was awarded the accolade for Best Fashion Collection 2015, after being chosen by a panel of judges, including Head Designer for Women’s Knitwear for Prada Group, Roberta Marcolin.

Elyse, 21, said: “It’s such a strange but amazing feeling seeing your collection all come together on the runway.

“My collection reflects a sense of relaxed and timeless appeal, with a real focus of fine fabrics and creating comfortable staples that have a directional twist.

“It’s about creating exquisitely crafted pieces, inspired by the nature of fabrics, the process of ageing and the intricacies of different cultures.

“My concept developed from my interpretation of the arts and crafts movement, which incorporates two contrasting factors. These factors being that, handcrafting an object is a very complex process within itself and yet the movement was directed towards ‘simplicity of living.’”

Roberta Marcolin, Head Designer for Women’s Knitwear at Prada Group, helped judge the Best Collection category, alongside Vice-Chancellor of the University of Derby, Professor John Coyne, and David McGravie, who is Head of Art and Design.

Roberta, who is based in Italy, previously worked for Dolce and Gabbana for 18 years as Women and Men’s Head Knitwear Designer. From 2005-2010, she established her own woman knitwear collection before working with Prada.

Elyse, who is from Runcorn, in Cheshire, added: “I am absolutely delighted to have been honoured with the award and overwhelmed by all the positive feedback, comments and support I have received during my time at University and my year out in industry.

“It is a fantastic feeling to know that a head designer from such a prestigious fashion house as that of Prada has not only seen my work but has felt it worthy of an award.” 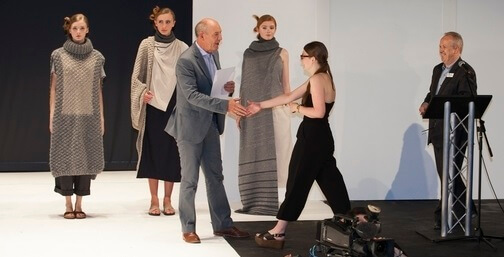 Fashion student Nicole Wells, who was announced as runner-up in the Best Fashion Collection category at The Big Show, also won the coveted award for Best Portfolio.

The category was judged by Huw Davies, Dean of the College of Arts at the University of Derby, and Beverley Whatnall, Manager of Aveda Urban Therapy salon, in Derby – a sponsor of the Big Show 2015.

The 22-year-old said: “I really was not expecting to win, I’m so surprised. I don’t think you realise how much hard work has gone in to your collection until you see it come together.”

Emily was presented with a cheque for £1,000 and a scholarship trophy after designing a Made in Britain clothing collection for working women. Chantelle Cassidy, who is studying BA (Hons) Fashion, and Textile Design student Emily Middleton were named runners up.

Media Make-Up students from the University’s Buxton campus applied the make-up for the models for the fashion show and were managed by Julie McCann.

Staff from Aveda Urban Therapy salon, in Derby, alongside Head Stylist Robert Martin, created the hair look for the show.

Colin Thompson, programme leader for BA (Hons) Fashion at the University of Derby, said: “The whole team are happy to be working with a body of work that is stronger than ever, showcasing a seamless integration between fashion and textile design. We value this as a significant part of our unique selling point.

“All the collections feel modern and relevant and work creatively with original concepts, where the students’ passion shines through.”