Donna Kellogg MBE, Performance Sports Officer at the University of Derby, was awarded Coach of the Year for her efforts and hard work in what has been a triumphant year for Team Derby having been crowned champions in the inaugural National Badminton League (NBL). 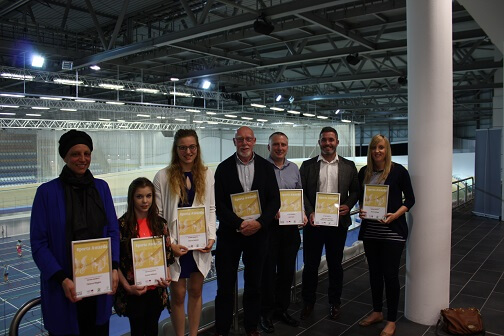 Donna said: “I wasn’t aware that I was up for the award so it was a pleasant surprise. I’m very fortunate to work with lots of talented badminton players on a daily basis with some of the best performers in Derby, Derbyshire and the UK.

“Working with the professionals in the NBL was the icing on the cake and to receive this award really is testimony to them and their efforts over the season.

Donna will also receive an Honorary Degree from the University of Derby in its January 2016 award ceremonies.

Ollie Shearer, Head of Sports Development at the University added: “The premise behind the franchise was to profile the University of Derby as an institution that is serious about sport, achieving awards like this proves that we are.

“Winning the first ever NBL title is a great achievement for Team Derby but also for the city and the county’s sporting landscape so we’re delighted to be recognised by both.

“We hope this is just the start of many more successes to come in the future.”

The awards were hosted by Derby City Council and celebrated a number of great achievements by Derby athletes and coaches.

Councillor Martin Rawson, Deputy Leader and Cabinet Member for Communities and City Centre Regeneration, said: “On behalf of Derby City Council I would like to congratulate all the winners for their fantastic achievements and the inspiration that they provide. I would also like to wish them the best of luck as they are nominated for the countywide awards that take place later this year.”

Team Derby will now be put forward for the Derbyshire Sport Awards which take place on November 12.