Engineering students from the University of Derby are on track for the world’s biggest student motorsport competition at Silverstone from July 8-12, 2015.

Team Derby Motorsport is made up of 18 undergraduate and postgraduate students, the majority of which study Motorsport Engineering at University of Derby. The team will race against 135 other teams from 28 different countries at Formula Student 2015.

The competition – run by the Institution of Mechanical Engineers (IMechE) - is the world’s largest student motorsport event and challenges student engineers to design, build and race a single seat racing car in one year.

Team Derby Motorsport will line up at Silverstone with 49 teams from other UK universities, and the main Class 1 competition will see 30 electric vehicles and 80 cars with combustion engines. 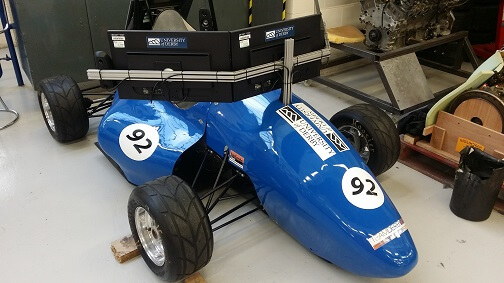 Jon Hilton, Chairman of Formula Student, said: “Formula Student is the world’s most respected student motorsport event and the sheer numbers of applications we have received for this year’s event prove it’s going from strength to strength.

“I’m delighted to see teams like Team Derby Motorsport competing in Formula Student 2015 – it shows that the competition remains one of the most important learning experiences for those aiming to combine their studies with exposure to a real world engineering project.”

Andrew Menzies, Team Leader of Team Derby Motorsport added: “We are very proud to compete in Formula Student Class 1 for the first time this year. As a new team to the competition we have a steep learning curve to get ourselves ready for the event. We are incredibly fortunate to have support from the University and around 40 companies as technical partners and sponsors.”

Find out more about Motorsport Engineering courses at the University of Derby.