University launches stunt in the city

Mr Wilson's Second Liners made a surprise guest appearance in the city yesterday (October 20) as part of a stunt hosted by the University of Derby.

The noisy brass band, which plays 90s dance covers paraded through the University's Atrium, in Kedleston Road, before marching through the Market Place in Derby. 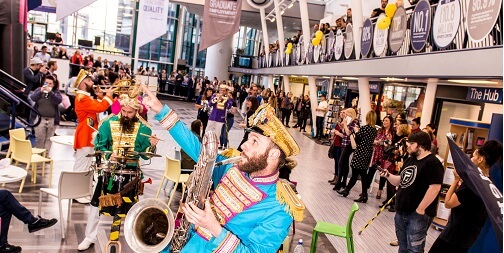 The University were also giving people the chance to name the tunes and leave their answers online at #Derbyuni for the chance to win one of four Ticketmaster vouchers worth £50 each.

Head of Brand, at the University of Derby Laura-Jane Gould, said: "Mr Wilson's Second Liners were fantastic and they really got the crowd going. The stunt was a way for us to raise the profile of the University and engage the city. We hope everyone enjoyed it."