Late student’s award for study in the face of adversity

A much loved University of Derby student who died shortly after completing his Occupational Therapy course last year (2014) will be posthumously granted an award recognising triumph over adversity.

Despite being beset during his studies by serious health issues and pain, also requiring surgery – and coping with the death of his grandparents (who died within 15 weeks of each other) – Jamie successfully completed three work placements; and received the highest number of ‘thank you’ letters of any student, from his first work placement. Tutors say he remained positive throughout his studies, helping course-mates despite his own difficulties. 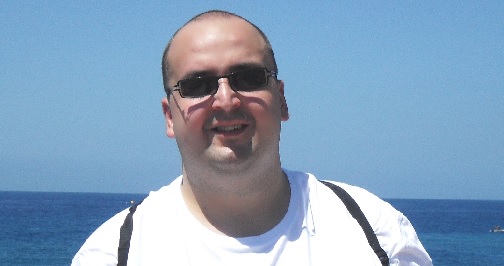 Sadly, Jamie died suddenly at home last October (2014), aged 30, after completing his degree, for which he received a 2:2 Class degree. The cause of death was sudden cardiomyopathy, a problem with the heart muscle.

At the University of Derby’s Awards Ceremonies on Friday January 16, at Derby Arena, Jamie’s mother Toni Coxhead will receive his degree certificate for him; watched by Jamie’s father and brother, David and Luke Coxhead, and aunt June Walvin.

Toni will also receive for Jamie the ‘Irene Lewis Award’, an accolade given each year by the University to honour a student’s achievement over personal adversity. A cash prize given with the award will be split between two charities Jamie supported, Cancer Research UK and Alzheimers Research UK.

Toni Coxhead said: “Jamie was a kind and caring man, and it wasn’t a surprise to his family that he studied to go into a career which would involve helping others. We miss him every day.

“It will be a very proud moment for me to pick up Jamie’s degree and to know that his Irene Lewis Award prize money will be going on to benefit others.”

Paula Crick, Dean of the University’s College of Health and Social Care, said: “Jamie was a very popular student, and the academic staff and students who worked with him were very saddened to hear of his death.

“Throughout his studies Jamie showed commitment and a compassion for clients when on his work placement, which prompted a lot of thank yous. We were proud to have him on the course and feel he is a very worthy recipient of this year’s Irene Lewis Award, recognising study success over adversity.”

Around 3,400 graduates who studied at the University of Derby's seven Colleges – covering education, health and social care, business, life and natural sciences, engineering and technology, the arts; and law, humanities and social sciences – and almost 12,000 family, friends and other guests will attend the three days of the Awards Ceremonies from January 14 to 16 at the new Derby Arena in Pride Park.

For further information about graduation at the University of Derby go to www.derby.ac.uk/graduation