A photography student at the University of Derby who took images of traders in Derby’s Market Hall has had her artwork selected to appear in a special gallery on The Guardian’s website.

Emma Logan, who is a third-year BA (Hons) Photography student, saw an advert on the newspaper’s website inviting students to share their end of year artwork as part of The Guardian’s Students Express series.

Emma said she “quickly realised she had nothing to lose” and put forward two images of her degree work, called The Derby Market Hall, which showcases portraits of tradespeople in their day-to-day jobs.

And soon after, she received the news that her image of a woman reaching for a bunch of bananas on a fruit stall had been selected by the Guardian's picture editor, Roger Tooth, as one of a small number to publish in an online gallery of his favourites.

Emma, 21, said: “I had intended to submit all seven of the images from my degree project but only two images succeeded to go through to the contribution page.

“So when I received an email informing me that I had been selected by the photo editor, I was shocked and lost for words. I had to re-read it and get somebody else to read it for me just so I was sure it was actually true.

“It was only when I had shown my tutor the email – and the reaction from her was what made it real – that I became overly excited.” 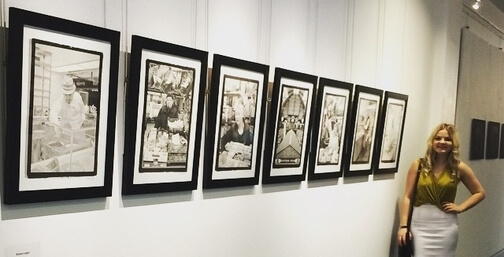 Emma’s final degree project on Derby’s Market Hall features six images of tradespeople, including a butcher, fishmonger and confectioner, along with an image inside the historic market itself.

Emma specialises in the salt printing process – a paper-based photographic process for producing prints during the period from 1839 to 1860 – but had initially struggled to find a link between the Market Hall and the technique.

Emma said: “I wanted to find self-employed individuals, like myself, who work hard to try and earn money.

“When I walked through Derby Market Hall, I realised the market traders would be perfect to photograph but wondered how I could link them to salt printing.

“After researching the market, I later found out the building was under construction at the same time salt printing was primarily used and experimented with giving me direct association between my ideas.”

Emma’s work will be displayed at The Rag Factory in London on Friday (June 19) as part of the University of Derby’s photography exhibition, called Lux.

Philip Harris, programme leader for BA (Hons) Photography at the University, said: “Emma has worked tirelessly with her work during her degree and has developed a highly personal approach to image making.

“Her work clearly demonstrates how older analogue processes can be fused with digital methods to produce images that offer viable alternatives to the more market driven methods of photographic image making.

“Emma has shown a sense of enquiry that represents very successfully what we aim to achieve at the University of Derby.”