A Romanian student who came to the UK to pursue his love for art has won a top award for his final-year degree project.

Iuliu Leonard Mei-Rosu decided to make the move in 2012 to study a BA (Hons) Fine Art degree at the University of Derby.

Now, he has scooped the highest award in the University’s College of Arts, the Vice-Chancellor’s Award, for his work, Transcending Dwellings.

Iuliu said: “I researched a lot of different courses and universities and found that Derby was most suited to me because of the facilities and freedom of the course.

“I am very proud of my final project. I define my work as a transition from architecture to sculpture by creating fantasy and dreamlike conditions.

“In my work, I combine the gothic style of old buildings that inspire me, with elements from my own traditional culture, having them represented on vertical axis to show cultural symbiosis.

“I made the sculpture from pieces of wood and metal. The bases, which the buildings emerge from, have been created from dyed concrete.”

Final-year arts students unveiled their creations at a special preview of the University’s Big Show Public Exhibition on Friday, May 29, with a host of students scooping awards for their work.

Visitors to the private viewing were given the opportunity to immerse themselves in a feast of visual art, design, textiles, photography, creative expressive therapies, architecture and engineering.

A panel of judges viewed each of the students’ work in the College of Arts and College of Engineering before selecting the prize winners.

Iuliu added: “I am astonished to have won the Vice-Chancellor’s Award. It is such a huge honour and it has really motivated me to continue with my passion for art.”

Laura Hutton, who is studying BA (Hons) Photography at the University, won the Linda Swanson Award for her project, Hidden Memories.

The 23-year-old, of Lichfield, took still-life images of treasures handed to her by her grandparents, including a pocket-watch, as well as taking pictures of old photographs. 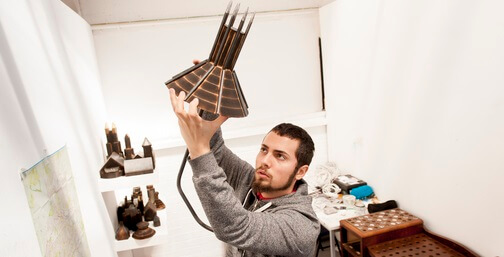 Laura also produced a 10-minute film incorporating cine-film footage from the 1960s to accompany her photographs.

Laura said: “A lot of people put their keepsakes, and their pasts, in closed photo albums but I wanted to bring them to light.

“The film was passed down to me from my granddad. It shows my great-great-grandparents, as well as my nan and granddad, as young children.

“Both my granddads have passed away since I have been at university so by doing this project it has helped me to come to terms with their deaths. I see my project, and my award, as a tribute to my family.”

The 21-year-old took inspiration from the country’s landscape and flowers to create multi-coloured floral wallpaper and textiles for her collection, India – A World of Colour.

Chloe, who wants to pursue a career in interior design, said: “I also had a carpet created by British carpet manufacturer Brintons, featuring my designs as part of my collection.

“I am so chuffed to have won this award. It is great recognition of my hard work.”

“Our congratulations go out to all our graduating students as they complete this first stage in the journey of their professional lives.

“Of particular note this year were the stunning 3-D installation and textiles works of Iuliu Leonard Mei-Rosu and Rebecca Dainty who won the Vice-Chancellor and Deans prizes and Jane Smith, whose poignant sculptural pieces received the Derbyshire Community Foundation Award. A number of other prized works received Best in Show Awards and others were purchased for the University’s collection.”

The Big Show Public Exhibition is free to visit and is now open for public viewing until Saturday, June 13 at the University’s Markeaton Street and Britannia Mill sites.