End of debate: Buxton is best in UK for hospitality

Three students from the University of Derby have won the argument over the best university for hospitality education by coming top in a Europe-wide debating contest.

Aditya Prasad, Elsje Hugo and Victoria Colman beat all other university teams to win the annual Institute of Hospitality’s Passion for Hospitality contest.

It was only the second time that International Hospitality Management students from the Buxton campus had entered, and in the final they beat the renowned Hague Hotel School by 56 votes to 34.

“Once again our students have demonstrated why we are the number one university for hospitality education in the UK,” said Dr Sarah Rawlinson, Head of the School of Hotel, Resort and Spa Management.

The competition demands that each team prepares a case for and against a motion – without knowing which they will have to deliver. To win, Derby had to argue that social media was not a force for good in the hospitality industry. 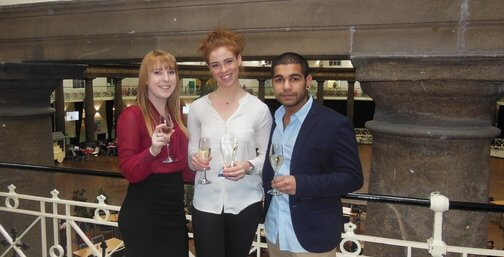 Former Buxton Community School pupil Elsje said that her university programme at Buxton reflected the argument in favour of human contact against cyber-skills: “This industry is all about people, interaction and the personal touch.”

Tony Clodd, Head of Culinary, Hospitality and Events Management, said the debate also raised the spectre of a future generation of workers who put social media before personal contact.

“What are we going to do with a generation of young people who can’t connect face-to-face?” he said.

“What is important about this competition is that it encourages the skills of persuasion, negotiation and team-work, as well as thinking on your feet.”

And as an added bonus, Victoria received news that she has been offered a graduate trainee manager position with Marriott Hotels in London.

The debating teamed thanked their coaches, lecturers Kathryn Scott and Leonard Cseh for preparing them for the contest.