The stars come out in Buxton for Hollyoaks wedding spectacular

Events management students made a TV soap star’s dreams come true when he married his long-term partner at the University of Derby’s Buxton campus in what the national press has dubbed “one of the most beautiful weddings ever.”

Hollyoaks actor Kieron Richardson married Carl Hyland in the historic Devonshire Dome – which had been transformed into a fashion catwalk with a nightclub thrown in for more than 200-plus guests.

Kieron, who plays Ste Hay in the long-running show, contacted the University’s Business Development Manager Christine Sweetmore with ideas for his dream wedding after hearing that the campus had hosted the prestigious Northern Design Awards.

He wanted a big space, including a catwalk for his 12 bridesmaids who would dress as brides,  a suitable dance floor, a spectacular meal and everything else needed to create one amazing day.

Big weddings – particularly Asian ceremonies with hundreds of guests – are now big business at the Dome, which has everything under one roof: hair salons, a spa, top-class dining facilities and even prayer rooms.

“The Hollyoaks make-up and hairdressing team took over the salons from 8am and did all the bridal make-up,” said Christine.

“The students did everything else from making wedding favours, to meeting and greeting, as well as looking after the Hollyoaks stars and pop legends The Drifters, who provided the music.

“One student told me afterwards: ‘I can’t believe in just my first year I’ve been working on an event like this.’” 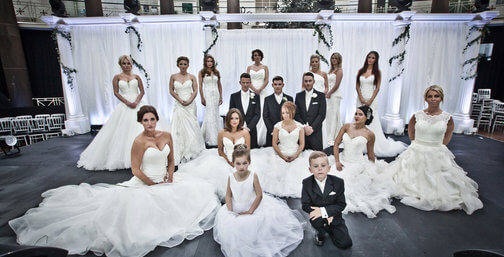 Christine believes Keiron’s wedding has put the University on a higher level after years of building the business up as a major event venue.

The Devonshire Dome is now recognised as one of the premier events venues in the county and this wedding has once again helped put The Dome on the events map as a major venue.

“Of all the events we have done here at the Dome, this was probably one of the most stressful but was also extremely rewarding, especially seeing how much the students loved working on the event,” said Christine.

Enquiries about bookings poured in after the wedding, which the Daily Mirror said was “one of the most beautiful ever,” and with local suppliers used wherever possible, such as Rollercoaster Productions who created the catwalk,  it is also good for Buxton, she added.

Twenty-nine-year-old Kieron, who faced a barrage of abuse when he first revealed he was gay, has become a campaigner for tolerance, meeting Prime Minister David Cameron to discuss ways of tackling homophobia.