A fine art student at the University of Derby whose best friend died from a brain aneurysm has created a moving film in his memory.

Keilan Braithwaite, from South Derbyshire, was 20 when he passed away suddenly last September.

His friend Carl Smith, who had just begun the final year of his BA (Hons) Fine Art degree at the University of Derby, said Keilan’s death had been the “most painful experience of his life”.

The 21-year-old, from Swadlincote, created a film for his final-degree project to portray his grief and will now be showcasing it at a charity event at Quad on Tuesday (June 2) as well as at the University’s Big Show.

Carl said: “Keilan’s death broke me. I have never felt a pain like that ever before.

“We called ourselves the ‘Dynamic Duo’; we were like Batman and Robin.

“When Keilan died my brain just switched off. I decided that a way to help me cope and channel my grief was through making a film in Keilan’s memory for my final-year degree project. It gave me something to focus on while remembering Keilan at the same time.”

The film, called It’s Me, is an interpretation of The Last Supper painting by Leonardo da Vinci.

The 13-minute production features a selection of quirky characters who, while appearing happy sat around a long table, are quietly grieving over the loss of their friend.

Carl said: “The characters in the film are all dressed in different costumes. These are all outfits that I would wear each Wednesday to University. One week it would be an alien, a chicken or a robot.

“This was something that I had done ever since first-year for a performance art project.

“Whenever there was a fancy dress occasion, Keilan had one go-to costume and that was Electro Boy. It was a costume he made up consisting of a lightning bolt on his green t-shirt, green tights, black shorts and a towel for a cape.

“The characters in the film are mourning over the death of Electro Boy, who is represented in the film by his costume which is laid on the floor.”

The soundtrack to the film features music made by Carl and Keilan. 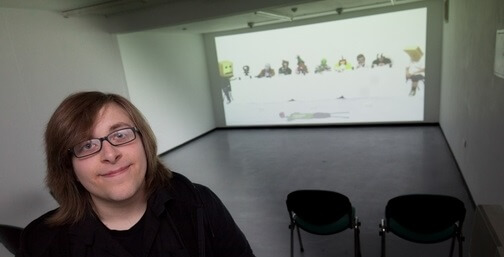 Carl said the pair had been friends since meeting in Year 7 at The Pingle School, in Swadlincote.

He said: “Keilan was a loyal friend who was always there when you needed him. He liked making music as well as films and was studying at the University of Lincoln.

“Even though he was so young, he touched so many people’s lives.

“Keilan’s family and the staff at the University of Derby have all been very supportive of me making this film.

“This is purely for Keilan because he was such a big part of my life and I really want this film to be part of the legacy that Keilan has left behind.”

Carl has organised a charity event for the screening which will take place from 5pm-6pm on Tuesday (June 2) at Quad.

Tickets cost £2 and are available on the door. All money will go to The Pingle School to create a Rock School for the students.

Caroline Locke, senior lecturer of BA (Hons) Fine Art at the University of Derby, said: “The sudden death of Carl’s best friend was shocking and had a major impact on Carl at an important time in his studies.

“Grief like this can be all-consuming and we quite expected Carl to take time off and perhaps struggle with his workload – he did not.

“With courage, he has working tirelessly throughout his third year to create a stunning and moving film in connection with his loss.

“He has arranged a fundraising event that I have helped to set up for him in memory of his friend. We are proud to support such dedication, Carl has a great spirit.”

The University’s Big Show is a series of live events and exhibitions across Derby which offers visitors an opportunity to experience the best of emerging contemporary art and design practice from the University’s College of Arts and College of Engineering and Technology students.