How tunes for tots are gaining musician big time airplay

Original songs about dragons in the bedroom and grumpy dogs by a University of Derby Education Studies graduate are proving a big hit with tots and their parents.

David Gibb, who will graduate at the University’s Awards Ceremonies, at Derby Arena, tomorrow (Wednesday January 14), is forging an unusual career as a musician who writes his own songs and performs just for children and parents.

Tracks from his album, Letters Through Your Door, have been played on BBC Radio 1, 2, 3, 4 and 6; he has taken to the stage at the annual Glastonbury Festival and performed over 400 other concerts; and won a ‘Highly Commended’ award at the annual Young Storyteller of the Year competition in 2011. 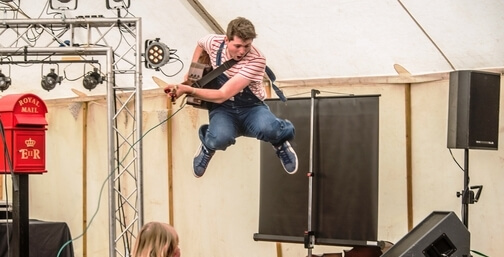 David, 23, from Belper, said: “There’s a strong children’s music movement in America, with artists writing original songs just for them, which you don’t see a lot of here.

“I wanted to combine my musical talent with what my degree had taught me about working with children, to produce songs which could be fun and educational.

“What came out of that was my Letters Through Your Door album, which is full of catchy tunes like There's A Dragon In My Bedroom and The Dog Doesn't Listen To Me, which kids can sing along to.”

David’s ambition is to compose further albums for families and develop his following. More information about his work can be found on David’s website.

Around 3,400 graduates who studied at the University of Derby's seven Colleges – covering education, health and social care, business, life and natural sciences, engineering and technology, the arts; and law, humanities and social sciences – and almost 12,000 family, friends and other guests will attend the three days of the Awards Ceremonies this week (January 14 to 16) at the new Derby Arena in Pride Park.