Engineering students take to the track at Silverstone

It was the first year that Team Derby Motorsport – a group of 18 undergraduate and postgraduate students (the majority of who study Motorsport Engineering at the University) - entered the competition in the class one category.

The competition consisted of several ‘static’ and ‘dynamic’ events. The static events included: a cost report, a business presentation and a design report. The dynamic events included: an acceleration test, skid past test, sprint track and endurance race. 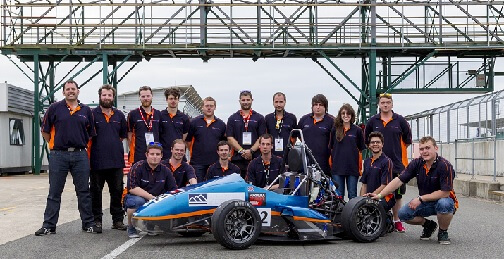 Team Derby Motorsport made it through to the final dynamic event – the endurance test. In order to take part in this, the team completed all parts of the scrutineering process, such as technical and safety inspections, as well as noise, brake and tilt tests.

Organised by the Institute of Mechanical Engineers (IMechE), teams are challenged to design, build and race a single seat car in just one year. More than 130 teams from 28 different countries took part in this year’s race.

Speaking after the event, Andrew Menzies, Team Leader and Demonstrator for Motorsport and Mechanical Engineering at the University of Derby, said: “I’m incredibly proud of what the team has achieved in our first year as a class one entry. To pass all parts of the scrutineering process and compete in the endurance event was an excellent end to the hard work everyone has put in.

“We’ve learned a huge amount about the competition and we’re already thinking up ideas and development routes for next year’s car. A huge thank you goes to our sponsors and technical partners who have supported us and without which it wouldn’t have been possible.”

Chris Smout, Senior Lecturer in Motorsport Engineering, added: “It has been a fantastic opportunity for University of Derby students to take part in the Formula Student 2015 competition. I couldn’t be more proud of the team and what they have achieved in the first year. The car drew a great deal of interest and compliments from judges and competitors alike.

“The event has enabled the students to learn necessary skills in a real-world learning environment, from team work and time management to forging strong links with industry partners. These are all skills that engineering projects encompass and will play a key role in their future success.”