University of Derby graduate Mark Farthing has gone onto pursue his dream career in professional football at the League Managers Association (LMA), one of football’s elite associations.

Mark graduated in 2012 with a degree in BA (Hons) Creative Writing. Mark was elected as Athletic Union President at the University of Derby Students’ Union for a period of two years.

Now Mark works as a Member Services and Commercial Executive at LMA, which involves working on activation of commercial contracts between the LMA and its partners and the member services department; supporting football managers with their performance and wellbeing.

Mark said: “My experiences and achievements at the University of Derby helped me secure my current role. Working in a sporting environment at the University gave me the opportunity to develop and enhance the skills I had gained as a committee member on the football team while studying."

Mark turned to University after he was released from Luton Town Football Club having trained since the age of 10 to become a professional footballer. 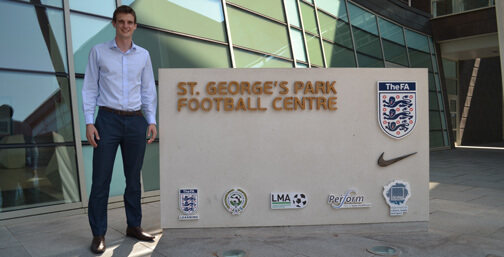 Mark added: “My education took a backseat while I pursued a career as a professional footballer, I always felt that I could fall back on writing when the dream ended.

“As a sportsman, people expected me to study something related to sport. My involvement with the University football team and subsequently the Athletic Union definitely helped me to get my role at the LMA.

“I consider myself to be very lucky to be working within professional football at St. George’s Park, in Burton, but I know that it was my willingness to put myself forward for voluntary positions within the Students’ Union, and give up my spare time away from studying that has afforded me the opportunity I have now.

“I came to university as a shy kid who was able to thrive through sport and then graduate as a young leader.”

Adrian Buckner, Lecturer in Creative Writing at the University of Derby who taught Mark said: “Mark’s success in securing such a prominent position in the highly pressured world of professional football is delightful (but not surprising) news.

"I always understood that football was Mark’s first love and had played a huge part in his life. He adapted very well to university, a considerable achievement in itself, considering his less than conventional route into it.

“It was clear from day one of his first year that Mark had the interpersonal skills and tenacity to thrive in a collaborative team environment and he took every opportunity to enhance and deepen these skills in his social and sporting activities. We are delighted that professional football can now boast one of Derby’s literary team.”