Education is game-changer in the fight against poverty, says Christian Aid Chief

Education is often the game-changer when it comes to fighting poverty, Loretta Minghella OBE, Chief Executive of Christian Aid, told an audience at the University of Derby’s Buxton campus.

Loretta defined poverty as a lack of power to influence your own life, and highlighted many examples across the world where racial, social or gender discrimination left people unable to even feed themselves properly.

She told the annual lecture for Churches Together in Buxton, organised by the University’s Chaplaincy, that Christian Aid intended to make permanent changes to people’s lives through projects which gave communities control over their futures.

“Education is often the game-changer,” said Loretta, who appealed for people to dig deep for Christian Aid Week (May 10 to 16) to help projects such as an initiative in Ethiopia which is changing attitudes to women’s roles in a pastoralist society.

She called for a rebalancing of the world’s resources, an end to the human behaviour which was changing the climate and a fairer system of distributing the world’s wealth - 50 per cent of which was currently owned by just one per cent of the population.

“We live in a world of unprecedented wealth yet the scourge of extreme poverty remains humanity’s most pressing challenge,” she said. 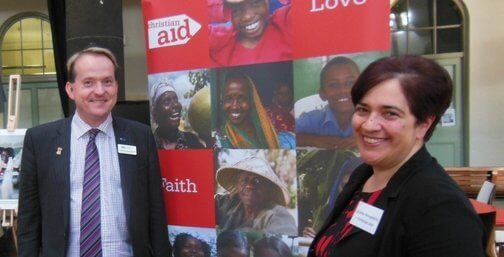 Loretta was introduced by the Bishop of Derby, Alastair Redfern, who as a trustee of Christian Aid nationally, said: “We are lucky to have such an inspiring leader at a time when it is more and more important to challenge our society about people whose lives are much more difficult than our own.”

Loretta, sister of the late film director Anthony and a former head of the Financial Services Compensation Scheme, discussed the University’s role in the community during the visit, which included taking part in workshops organised by the Chaplaincy for Christian Aid volunteers from across Derbyshire.

It was her first visit to the historic Dome campus and she said: “This must be one of the most beautiful venues I’ve had the privilege to speak in.”

Deputy Vice Chancellor Professor Rod Dubrow-Marshall, who led a question-and-answer session during the event, said: "The University of Derby was honoured and very pleased to host this inspirational talk by Loretta Minghella which was full of hope for the future and which espoused the emancipatory potential of education across the world."