Visiting Professor and Honorary, Derek Latham, returned to the University of Derby on Wednesday evening (March 25) to deliver a public lecture on sustainable architecture.

Over 100 people, including students and the general public, attended the lecture titled 'A Sustainable Approach to the Built Environment', which was held at the University's Kedleston Road site.

The Derby architect is the co-founder and Chairman of Lathams (formerly Derek Latham & Associates). The company, which was established in 1980 as a conservation practice, now specialises in the conservation and creative renewal of land and buildings.

Lathams are responsible for the design and delivery of several major projects throughout the UK and previous clients have included; the Derbyshire Historic Buildings Trust, the National Trust, English Heritage, the Royal Household and the Prince of Wales.

During his lecture, Derek discussed how to create great places without increasing carbon footprint by using natural and locally grown resouces.

Speaking after his lecture, Derek said: "It was a pleasure returning to the University of Derby where I have been so warmly welcomed in the past. My lecture created considerable interest, with many guests requesting that I make a video to present to the government and other environmental organisations." 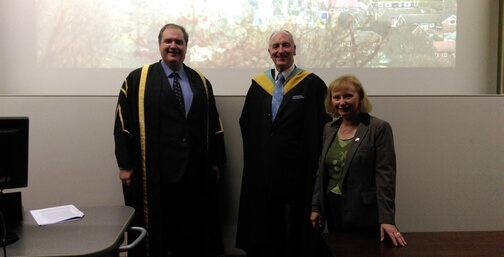 Derek announced his retirement with Lathams on Tuesday (March 24), after 35 years of service. He will be taking on a consultancy role within the practice.

Derek Latham studied at the Leicester School of Architecture (now part of De Montfort University). He served on the Derbyshire County Council from 1974-78, as a Design and Conservation Officer.

He is the Chairman of Regeneration East Midlands Centre for Excellence and founding member of both Opun East Midlands Architecture and Built Environment Centre and the Academy of Urbanism, which advises cities and other authorities on sustainable growth.

He has served as a Regional Representative for the Commission for Architecture and the Built Environment (CABE) in the East Midlands. He is also the author of The Creative Re-use of Buildings (published in 2000).

In Januray 2008, he was awarded with an Honorary Degree in Professional Practice from the University of Derby.