The nation is becoming addicted to smartphones, according to new research from the University of Derby.

Dr Zaheer Hussain, lecturer in Psychology at Derby, co-authored what is believed to be the UK’s first research study into smartphone addiction and its related psychological characteristics, which clearly shows that the more you use a smartphone, the higher the risk of becoming addicted.

He said: “The study informs us about smartphone overuse and the impact on psychological well-being. We now use smartphones on a daily basis and for various tasks so being aware of the psychological effects is very important.

“There are various smartphone apps such as Facebook, Twitter, Instagram and Candy Crush, as well as Skype and email that make smartphone use psychologically more attractive and can lead to addiction.”

The results of the study revealed that 13% of participants were classified as being addicted, with the average user spending 3.6 hours per day on the device. The research also advises that prospective buyers of smartphones should be pre-warned of the potential addictive properties of new technology. 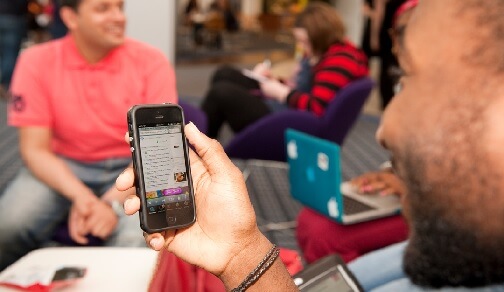 The psychological characteristics of smartphone addiction are particularly interesting, Dr Hussain explains: “Higher scores of narcissism (excessive interest or admiration of oneself and one’s physical appearance) and levels of neuroticism (negative personality traits including moodiness, jealousy, envy and loneliness) were linked to smartphone addiction.

“A significant positive relationship was found between narcissism and addiction to the phones, suggesting that the more narcissistic a person is, the more likely they are to be addicted to their smartphone. When the participants were asked if they used their phone in banned areas, 35% answered yes.”

Social networking sites were the most popularly used apps (87%), followed by instant messaging apps (52%) and then news apps (51%). Relationships were also noted in the research as despite 46.8% of participants speaking positively of improved social relations, 23.5% admitted their smartphones create communication issues within ‘real life’.

Professor James Elander, Head of the Centre for Psychological Research at the University of Derby, said: “This study is a very timely one with much potential impact, and the findings show that users should be more aware of how they are using their smartphones and of the potential risks of excessive use.

“This is also a great example of the applied psychological research being conducted at the University of Derby, where our emphasis is on socially relevant research with the potential for practical applications to improve health and wellbeing.”

The research paper, titled: ‘Smartphone Use, Addiction, Narcissism, and Personality: A Mixed Methods Investigation’ has recently been published in the International Journal of Cyber Behaviour, Psychology and Learning (IJCBPL).