Five hundred jobs are supported by the £32 million worth of spending generated each year by the University of Derby’s Buxton Campus, an economic impact report commissioned to mark the institution’s ten years in the town has revealed.

Opened in 2006 by Prince Charles, the University now accounts for 1.6 per cent of employment across the Borough of High Peak – which includes Glossop, Chapel-en-le-Frith, Whaley Bridge and New Mills.

“The study shows the University to be of significant economic importance, bringing immediate benefits to all of its host communities in terms of output generated, jobs created and its contribution to regional Gross Value Added (economic output of goods and services),” said the report, commissioned by the University from business development company Prospect Research.

The Buxton Campus was opened after the University merged with the former High Peak College and, even though it attracts students from all over the world, its courses are aimed at developing the skills needed in the area for its tourism and hospitality industries.

These include sport and outdoor, events, hospitality, tourism and spa degrees, as well as Further Education (FE) offered by Buxton and Leek College which also offers courses at the historic Devonshire Dome as well as their sites in Leek and Harpur Hill. 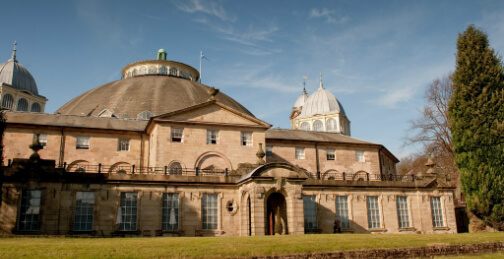 In 2013/14 there were 833 students at the Buxton Campus, 91 per cent of whom were from the UK and nine per cent international students – just over five per cent of the whole student population registered at the University of Derby.

That year, the study estimated that the expenditure of the University and its students generated nearly £32 million of output in the town and nearly 500 full-time-equivalent (fte) jobs, including around 350 fte University jobs based in Buxton and Leek, including staff at the FE college sites.

The report estimated that for every £1 spent by the University, a further £1.36 was generated by other industries through what is known as the “knock-on” effect from employees’ spending power plus business given to suppliers of goods and services.

And for every 100 fte jobs created within the University, another 97 were generated outside it, mostly in the East Midlands region.

The total output of the University as a whole was £560 million – seven per cent of which came from the Buxton operation and generating 5,060 fte jobs directly and indirectly.

The report added: “The University has a substantial economic impact at regional level – even in the context of a particularly large region. 0.3 per cent of East Midlands GVA is noteworthy for a single organisation, as is the overall amount of employment generated.”

Professor Rod Dubrow-Marshall, Deputy Vice-Chancellor at the University of Derby, added: “These figures demonstrate the importance of the University to the community which we serve and are so proud to be a part of.

"The University is celebrating ten years in Buxton in 2016. The figures are a vindication of the faith that so many organisations and individuals put into the project to give the wonderful Devonshire Dome such a vibrant new life."

High Peak MP Andrew Bingham added: “The University has had a huge effect on not just Buxton, but also the surrounding area. The students have made great efforts to integrate into the town and to play their part in the community, as well as bringing economic benefits to the High Peak.

“Occupying such an iconic building not only gives the university’s students a great thrill but it also gives those of us who are born and bred in the area the chance to show the students and their families who visit what a great place the High Peak is to live and work, and indeed, study.

“I would like to congratulate the University as they celebrate their ten years in Buxton and say that I am looking forward to the next ten.”