Buxton’s people are warmer than its weather, according to a group of South Korean students, who are based at a University of Derby summer school in the Dome.

The group of students from Daegu Haany University praised the politeness of the locals – especially students at Buxton Community School who were their hosts for a day – but were surprised at the cold summer.

The Koreans, many of whom are studying their country’s traditional medicine, were given an insight into British public life by High Peak Mayor, Councillor Stewart Young, a tour of Chatsworth, a visit to Manchester’s art galleries and museums, a talk by Buxton police and a taste of British justice by visiting the town’s magistrates court. 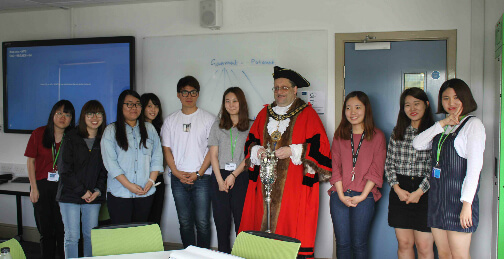 “I told them how the mayor is really another name for the chairman of the council, and about what I do in council meetings,” said Councillor Young.

“I ask councillors to speak in an orderly fashion so it’s not a rabble talking over each other!”

Councillor Lomax, a retired teacher, explained the different tiers of councils – county, borough and parish - who provide different  services, and how councillors have to balance competing pressures from the public in coming to decisions which they hope are in the community’s best interests – for example,  preserving precious open green space while having to select land for new housing developments.

Councillor Young’s mayoral vestments were much admired: “I explained that I only wear these for civic occasions, such as meeting the Queen, or her representatives, such as the High Sheriff or Lord Lieutenants.”

The Koreans were very impressed with the politeness of local people and said their hosts at the Community School were “very nice and so confident,” as one visitor put it.

But Buxton lags behind Korea in broadband: “That’s where we spoke about the work of the council in trying to bring in new business so that these things can get upgraded and get faster and better,” said Councillor Young. “Theirs is so much quicker in Korea.

“The other thing was that they thought was that it was cold here. They looked up the temperature in Korea and it was 35 degrees! I don’t think I’d have been wearing that hat and robes in that temperature!”