The University of Derby has been awarded £437,376 from Sport England to help fund a new project aimed at encouraging inactive people to take part in sport.

The project, named ‘Derby a City on the move’, will examine the positive impact of sport on individual health and wellbeing. It is one of only two universities to receive National Lottery funding from Sport England in the second round announcements for their UK-wide ‘Get Healthy, Get Active’ programme.

Research shows around 15 million people in England have a long-term health condition. Partaking in sport at least once a week could reduce a person’s chance of developing coronary heart disease, diabetes, stroke, cancer and dementia.

‘Derby a City on the move’ will target 5,500 inactive people with one or more non-communicable disease (NCD) risk factors such as high blood pressure and obesity over three years. Individual changes in behaviour will be monitored over a period of twelve months to see how sport can improve a person’s health and general wellbeing.

A series of ‘Get on the move’ interventions will be offered as part of the project. These interventions will target a range of ages, genders and health intolerances for instance impaired glucose tolerance to measure the role of sport in changing health inequalities within the city. 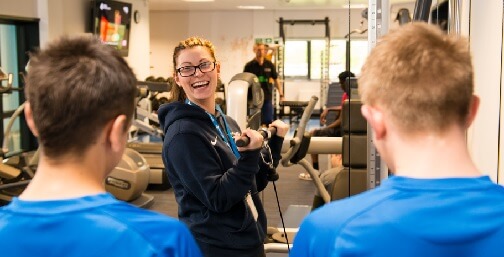 Sport England’s ‘Get Healthy, Get Active’ programme aims to encourage more inactive people to take part in sport at least once a week. Over 10,000 people have engaged with the scheme already.

Nick Draper, Head of the Department for Life Sciences at the University of Derby, said: “We have developed an excellent partnership with Derby City Council over the past two years. Together with the other partners we have been developing a physical activity strategy for the city and this project forms a cornerstone of the delivery of the strategy.

“The University will deliver the necessary research to measure the project’s impact and create a new brand of physical activity specialist. We are grateful to Sport England for their substantial contribution and promotion of physical activity through projects such as ours and others which are vital to helping the nation get moving.

“Their grant will enable us to look more closely at the potential of the methods being trialled through the research.”

Mike Diaper, Director of Community Sport at Sport England, added: “Physical activity plays a powerful role in improving people’s health. The ‘Derby a City on the Move’ project will highlight this by placing the emphasis on prevention of serious health problems.”