Kelly Holmes, Senior Lecturer in Film and Media at the University of Derby, has been awarded runner-up prize in The Pitch film competition with her film Attrition. Having impressed the five top industry judges in the boardroom at Pinewood Studios with her World War One themed film, she was selected to return for a second day. 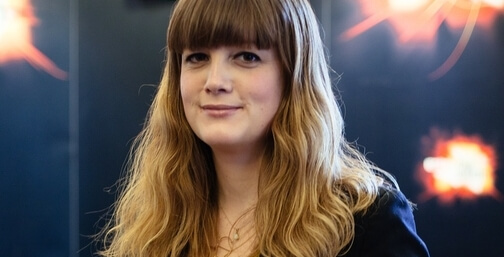 Kelly has won the opportunity to develop her idea with production support from The Pitch with a budget of £2,500.

She said: "I'm definitely going to make Attrition because I'm so passionate about the story. I was amazed to get so far in the competition and so fortunate to be in the top three. The £2,500 is a great starting point. I now need to develop the script and find a producer to start the rest of the funding process.

"I'm looking for an experienced producer to take this short film from script to screen. I've already secured £6,000 and I'm looking for investors to start a crowd funding campaign. This is an ambitious project but one I'm extremely passionate about with a strong story and visuals."

The top prize was awarded to Filmmaker Andy Toovey from Pontypool, South Wales, for his film idea Only Child. Andy won production support worth £25,000 to develop his film. He will have the opportunity to take his completed film to Hollywood later in the year to gain feedback from top industry professionals.

Luke Walton, Project Director said: "This is our best year yet. It was a strong competition with a fantastic judging panel, lively debate and some emotionally connecting and vibrant stories. Kelly pitched brilliantly in the boardroom. Her story really intrigued the panel as they were very taken by her vision and understanding of her context."

For further details on this release and interview opportunities, please contact Bridget Batty at Limtree Public Relations Ltd on 07771870400 or email bridget@limetreepr.co.uk.