Natalie Harrison, who graduates from the University of Derby this year, will kick-start her career as a Toxicology Analyst just one week after completing her degree in Forensic Science.

Orchid Cellmark spotted Natalie’s potential and offered her an interview for the role just one week after she finished her last exam and offered her the job on the same day. 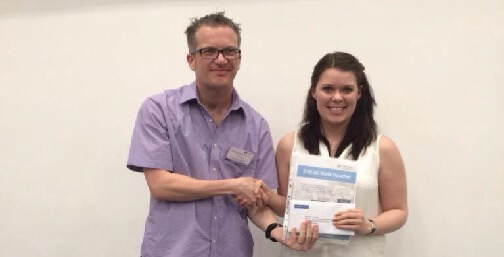 The company primarily deals with DNA samples either from the police for criminal investigations or for paternity testing.

Speaking about her new role, Natalie said: “It’s great to have been offered a job so soon and within a field I’m really interested in.

The University of Derby student covered a range of modules from crime scene investigation and the analysis of biological fluids to toxicology and drug analysis.

Natalie said she praises the guidance and enthusiasm she received from University staff throughout her student experience: “Studying forensic science at Derby has given me the experience of so many different techniques and applications of theoretical knowledge that my employers at Orchid Cellmark were very impressed by.

“The facilities also offered me real-world situations, such as the crime scene house, which gave a deep insight into crime scene investigations and all of the lecturers within the department have such a passion for what they teach and it all came across to students during the lectures.

Natalie plans to work for a few years and gain experience in a laboratory, then return to the University of Derby to complete an MRes in Forensic Science.