Renowned chef Raymond Blanc OBE made a dream come true for a University of Derby Culinary Arts student by giving her a full-time job at his world-famous restaurant, the Belmond Le Manoir aux Quat’Saisons.

Twenty-year-old Megan Fallows is now a commis chef at the Oxfordshire hotel and restaurant, where a year ago she landed two weeks’ work experience after contacting the firm on Twitter.

“It’s always been a dream to work somewhere with such a high reputation and standards,” said Megan, who completed her Foundation Degree in Culinary Arts this year.

“But now it’s actually happening it’s just a little surreal. I’ve met Raymond but I was lost for words. I’m not a shy person but he’s such a special man.” 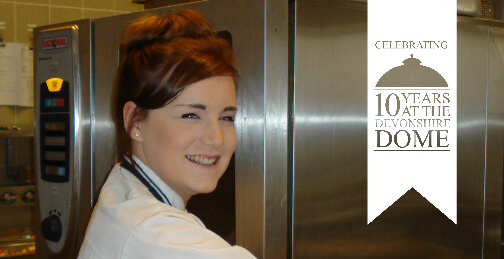 Megan’s interview included a trial in the kitchens and they offered her the job the same day.

Now she is looking forward to working in a restaurant which has launched the careers of many famous chefs, including Paul Heathcote MBE, Michael Caines MBE and Eric Chavot.

She added: “To think that in 20 years’ time I could be another chef coming out of Le Manoir is great!”

Megan said she knew Buxton was the place to study as soon as she walked into the magnificent Devonshire Dome at the Buxton campus, which next year celebrates a decade of providing real-world learning by combining teaching with hands-on experience.

“As soon as I walked into the building I just loved it,” said Megan, from High Green in Sheffield.

And the University lived up to its promise. “It really is real-world learning,” said Megan, who earned while she learned, putting her studies into practice by working in the University Restaurant and at functions held in the Dome.

“In this industry, you’ve got to know how to do it – not just learn about it.”

One of Megan’s fellow students and former workmate in the University Restaurant, Andy Bright, has also just gained a job in a top restaurant – Simon Rogan’s Fera in Claridge's, London.