The 16-year-olds, who are members of Ogston and Leigh and Lowton Sailing Club, were joint winners of the UK Young Adventurer of the Year award at last year’s ceremony.

The University of Derby competition seeks to find the best rock climbers, sailors, cyclists, runners, cavers, kayakers, bikers and skateboarders with an aim to recognise youngsters who excel at adventure sports and push boundaries to reach their potential. 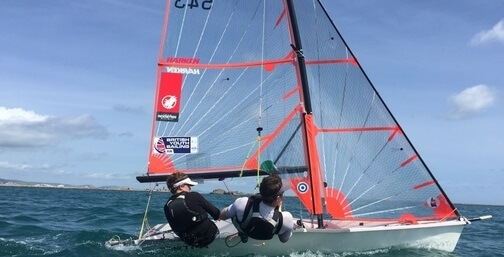 Harvey and Bobby, who have recently secured a place on the 2015/2016 British Youth Sailing Squad, were nominated by Harvey’s mum, Sara Martin.

She said: “I nominated Harvey and Bobby as they had worked incredibly hard over the winter and set themselves what seemed like very difficult goals for the 2014 competition season, yet they went on to achieve them all.

“Winning the National, European and World Championships in a period of a few months was an amazing feat.

“I felt so proud to see them win the UK Young Adventurer of the Year award. It was wonderful to see that their achievements were being recognised, not just in the sailing world, but beyond.”

Harvey, who lives in Alfreton and is a student at Chesterfield College, said: “Winning the award last year was absolutely mind-blowing!

“We were glad our hard work had paid off and were really pleased to be nominated and to win.”

Bobby, who is a pupil at Birchwood Community College, in Warrington, added: “Winning the award has definitely motivated us to carry on sailing and adventuring and we hope that we can go on to motivate others.”

Tomorrow (Saturday, October 10), the winners of the UK Young Adventurers Awards 2015 will be announced at a special ceremony at the University’s Oaklands Manor Outdoor Leadership Centre, in the Peak District.

As well as a trophy, the winner of each category will receive a GoPro HERO4 Session Camera to help document their future adventures.

Dr Chris Bussell, Dean of College of Life and Natural Sciences at the University, said: “I am delighted that the University of Derby is supporting the UK Young Adventurers Awards 2015 and to celebrate the amazing achievements of young people from across the country and their exploration of the great outdoors.”