The Together for England Roadshow rolled into Derby for October to mark the formal opening of a multi-million pound sports facility.

The University of Derby was the destination as the Three Lions helped to celebrate the latest addition to the Kedleston Road campus. 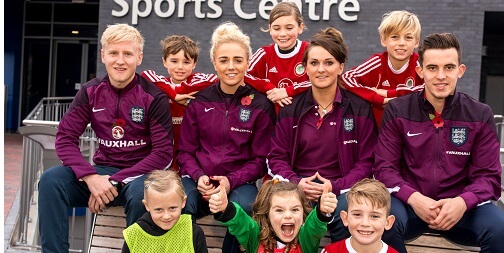 As well as the university’s students, the centre will be made available to sporting partners including local community clubs and organisations.

Youngsters from nearby clubs Allestree Juniors and Woodlands Ladies were on hand to put the facilities to the test as coaches from FA Skills and the Derbyshire County FA laid on football sessions.

The quartet of England stars joined in with the action before spending time to share hints and tips with the budding footballers.

Speaking at the event, the University of Derby’s Vice-Chancellor, Kathryn Mitchell, said: “As a University we place great importance on giving our students the best possible experience while they’re with us, and part of that is providing them with the facilities they need to learn, develop and achieve in, like our new sports centre.

“The centre will benefit not only our students and staff, but also local community groups and our partners in the city, for years to come.”

The Together for England Roadshow is a nationwide drive aimed at inspiring the next generation of Three Lions fans. Through a series of monthly events that utilises England representatives from all levels, the initiative is designed to strengthen the national team’s relationship with local communities.

The roadshow has already visited ten different regions throughout 2015 from Somerset to Teesside.

England teams will be in action on home soil over the coming months.

Meanwhile, England Women will be back in home action for the first time since their World Cup heroics on Sunday 29 November (3.30pm) when the Lionesses take on Bosnia and Herzegovina Women at Bristol City’s Ashton Gate.