‘No time’ for graduation for busy Film and Video graduate

Working on a new BBC TV series filming in Lithuania means University of Derby Film and Video graduate, Justina Petkevičiūtė can’t spare the time to attend her own graduation ceremony.

Justina, 22, an international student from Vilnius in Lithuania, moved to Derby in 2011 to study BA (Hons) Film and Video Production. She will be graduating in absence with a 2:1 Class Honours, at the Derby Awards Ceremonies next week (Thursday January 15).

She said: “Working as a Production Assistant has shown me what I like most about the world of film and helped me decide which direction I would like to go in.

“I’ve gained an insight into all departments that make up a film production. The position gives me a chance to observe the everyday challenges that film producers meet, watch how they handle the pressure, and control the course of difficult situations.”

With Baltic Film Services Justina has so far worked on the BBC2 film The Eichmann Show, about the 1961 televised trials of Nazi Adolf Eichmann in Israel, and she has now been accepted onto the unit list for the BBC’s serial adaptation of Tolstoy’s War and Peace (written by Andrew Davies and directed by Tom Harper). 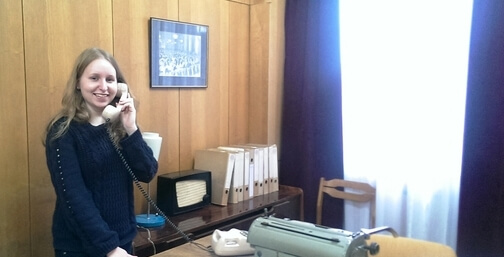 She added: “As War and Peace is a bigger production spanning over ten months, the pace of work is much faster. Also, there are more roles and a better division of tasks."

During her University studies Justina produced two short films and a documentary. Her graduation film The 1,000 Colors was one of several short films shown at the H.P. Lovecraft Film Festival in Los Angeles, USA, last September (2014).

Lithuania is experiencing something of a film boom at the moment. In January 2014 the country introduced a 20% tax rebate for films made in the country, creating more opportunities for aspiring filmmakers like Justina to get their work into production. The rebate has also attracted many European filmmakers to Lithuania.

Justina soon learned that having a degree taught in English, gave her a strong knowledge of the British film industry and good language skills, and put her at an advantage over many young Lithuanian filmmakers.

“I always knew that I wanted to study abroad,” commented Justina. “There were no film degrees of this sort in Lithuania. I knew that any film-related degree that I would get in Lithuania would not interest any companies if I were to work abroad.

“I chose Derby as it was one of the few universities in the UK that had a practical Film Production course, rather than Film Studies which focuses solely on theory.”

Tom Craig, Programme Leader for the BA (Hons) Film and Video Production at the University of Derby added: “I am proud of all that Justina has achieved since leaving Derby and wish her all the best in her career.”

Around 3,400 graduates who studied at the University of Derby's seven Colleges – covering Education, Health and Social Care, Business, Life and Natural Sciences, Engineering and Technology, Arts; and Law, Humanities and Social Sciences will attend three days of the Awards Ceremonies next week (January 14 to 16) at the new Derby Arena in Pride Park.