The Buxton hustings will take place on April 20, at the Devonshire Dome, and will feature all candidates standing in the High Peak constituency. Recent polls have predicted a close run contest in this Conservative held seat.

On April 21, candidates from Derby North will take part in a hustings at the University’s Kedleston Road site in Derby.

Both events will feature a ‘Question Time’ style panel debate giving the public and students a chance to pitch questions to their local candidates. The hustings will be hosted by Chris Hughes, Chair of the Governing Council.

Jeremy Swan, External Relations Officer at the University of Derby, said: “With the upcoming General Election looking like the most open contest in a generation, there will be everything to play for come May 7.

“Derby North is one of the most marginal seats in the country and the contest is also expected to be tight in High Peak so we’re delighted to be holding hustings in these constituencies to give voters a chance to make up their minds about whom to vote for. We hope the debates will also encourage our students to take to the polls.”

The University will also host a mini public lecture series titled ‘Politics: So What?’ The lecture will first be delivered on April 15 in Buxton, at the Devonshire Dome, and will be repeated in Derby on April 16, at the University’s Kedleston Road site. Both events will begin at 6.30pm for a 7pm start. The lecture is free to attend, however booking is advised. 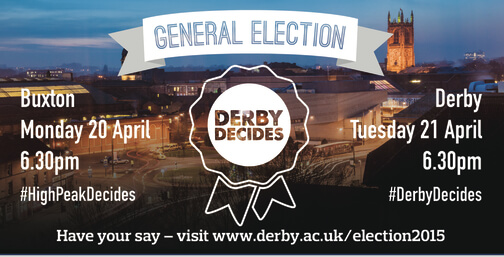 During the evening, speaker Kevin Bampton, Head of the Department of Law, Criminology and Social Sciences at the University, will discuss modern day British politics and politicians’ motives, and share his thoughts on the “Five Things That No Political Party Wants to Explain”. These are:

Kevin has worked with the United Nations on multi-party democracy and economic reform. He has covered local election outcomes for the BBC and overseen elections in countries where exercising the right to vote could lead to the death penalty.

Speaking about his talk, Kevin said: “Political involvement needs to be more than just a cross in box every five years; otherwise we give a mandate for an ‘elective dictatorship’. I am passionate about engaging people in ongoing political dialogue, but that has to start with asking some of the harder questions about politics.”