A University academic will be delving into Britain’s embarrassing reputation as the ‘lazy nation’ of Europe in his inaugural lecture.

Professor Nick Draper, who worked as team manager for the British Judo Team at the Sydney 2000 Olympic Games, is delivering his first public lecture in the role of Head of Life Sciences at the University on Tuesday 5 May.

The event, called Change Your World: Physical Activity for All, will focus on Professor Draper’s involvement with physical activity promotion as well as discussing why Britain is ranked as one of the most inactive nations in the world.

Professor Draper said: “Britain has been referred to as the lazy nation of Europe. Recent research even suggests that we, as a nation, are 20% less active than the USA. Is there hope for the future?

“My lecture will examine why we are where we are and looks at possible ways to change the current situation. It also sets challenges for us as individuals, for physical activity promotion specialists, for local and national government and for Public Health England.” 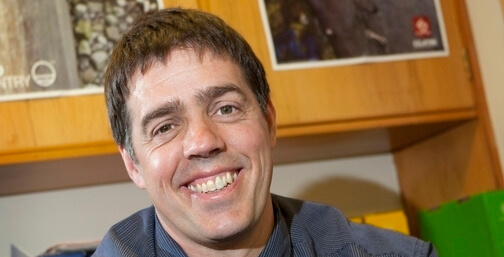 Professor Draper, who began at the University of Derby in January 2014, graduated from the University of Exeter before starting a teaching career in London, while pursuing a masters degree in Education part-time.

Bitten by the postgraduate bug, he applied to study a PhD at the University of New Mexico in the USA, which he completed in 1994.

After returning to the UK, he taught at the Universities of Wolverhampton and Chichester as well as working for the British Judo Team for several years, taking him to the Sydney Olympics in 2000.

Professor Draper has taught physical education at schools in the UK, US and New Zealand as well as exercise physiology, which is his real passion.

As a researcher, he has pursued interests in the physiology of adventure sports, elite athlete testing and performance, and physical activity promotion.

Professor Draper said: “The lecture is open to everyone who is interested, whether that is students, researchers, sport lovers or the general public.”

The free inaugural lecture ends with questions from the audience. Questions must be submitted beforehand when booking a place on the event.

The event will take place from 6.30pm to 7.30pm in room OL2 at the University’s Kedleston Road site.