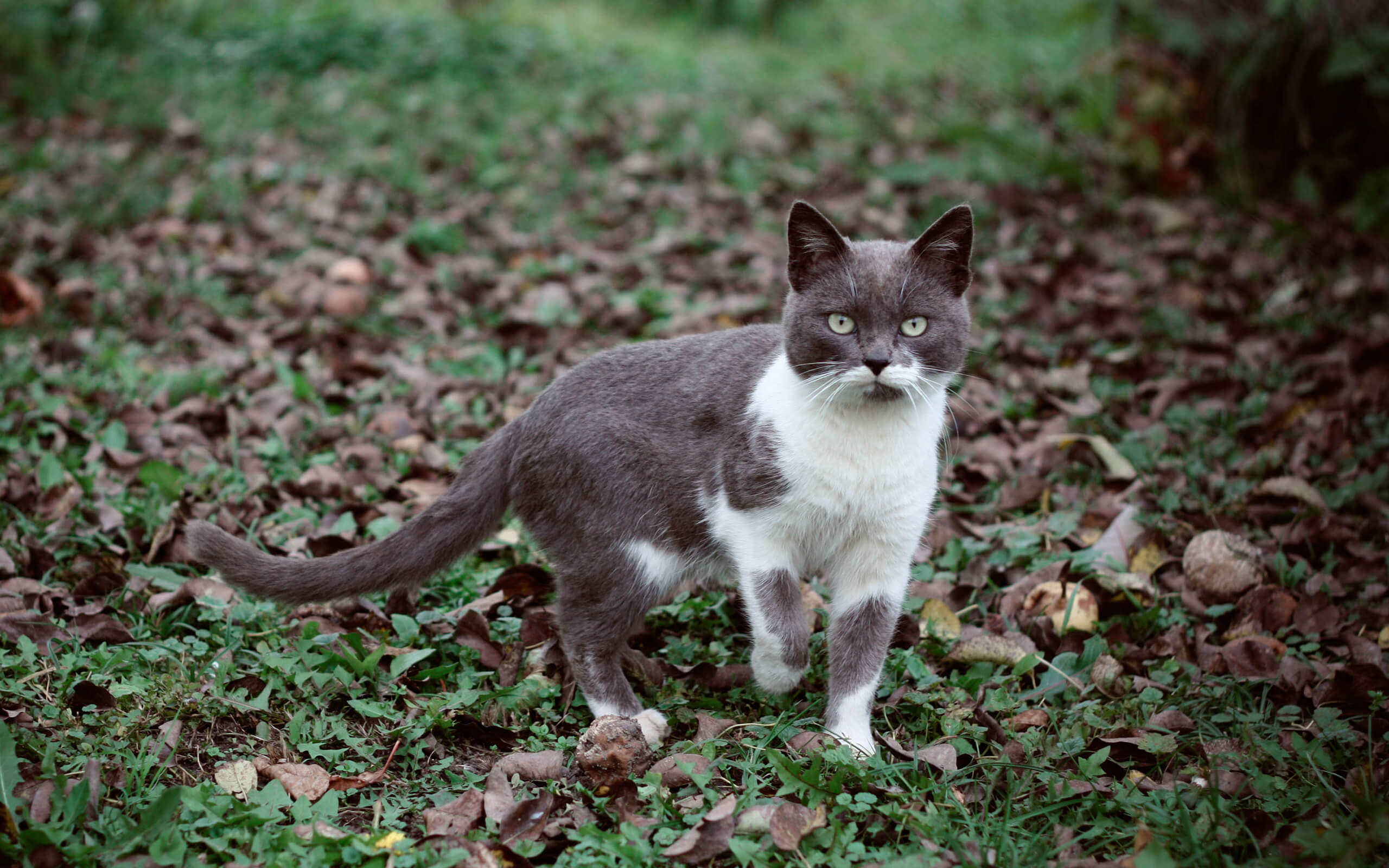 How cats
behave
when
no-one's
watching

Dr Maren Huck’s research into cat behaviour has lifted the lid on what your pets get up to when they think they’re not being watched. Our lecturer in animal behavioural ecology attached collar cameras to 16 cats – and produced some intriguing results.

Maren’s pet cat, Treacle, was just like everyone else’s. She followed Maren around the house, she ate, she slept, she loved being scratched behind the ears – and under her chin. She didn’t do much. But then Maren woke up to find a bird of prey in her bedroom. Had Treacle, who was about a year old at the time, really caught it and killed it?

These were the questions that initially inspired Maren to track Treacle’s behaviour. As she explains: “When I woke up, I found a merlin, a raptor, in my room but I thought there's no way that she actually killed it. I'm pretty sure, I mean I can't be 100% sure, but I'm pretty sure that actually she found it and brought it in. It was nearly as big as she was.

“So this triggered thoughts that were lurking in the back of my mind that we want to know more about what cats bring home and how this relates to what they actually kill.”

Maren started a diary of Treacle’s exploits. To evaluate the error rate (both of under and overestimating), she used a small camera with a 2.5-hour battery life that could clip on to a collar and could also record in infrared so she could track Treacle at night.

Maren was sure Treacle had previously brought home a few animals she hadn’t killed: the merlin and some other birds that had clearly not died recently. But she had no evidence about whether Treacle had killed other animals and then eaten them outside or discarded them.

“I think, in general, the assumption is that it’s more likely that they killed something and didn’t bring it home,” says Maren. The camera would allow her to see whether Treacle killed more than she brought home.

Maren collected footage for just over three years. During that time, Treacle was seen on camera catching one thing, a woodmouse. However, in total, she brought home 141 mammals and birds. She was quite a hunter. But Maren was more intrigued by the changes to Treacle’s behaviour when she was outside alone.

“I thought it would be a nice thing to actually see whether you can validate that and that's how the project started. I wanted to really validate this method because I thought this would be a good idea or good method to actually find out what cats are doing, quite apart from predation, when they're not under the supervision of humans.”

The next stage of the project was to follow a larger number of cats, to get a better sense of how they behave when no-one is watching. Supported by our Environmental Sustainability Research Centre and working with Samantha Watson, an animal behaviourist at Manchester Metropolitan University, the co-author of the study, they lined up 21 cats in total to take part.

However, only 16 of the cats could tolerate the cameras. The others either began racing around or tried to scratch the cameras off. One mother cat, who was clearly unhappy with her own camera, began hitting her son when the researchers tried to put one on him. Neither cat was used for the study.

One major change in behaviour that Maren noticed in her initial research was that Treacle vocalised less outside than she did in the house, and that the pitch of her voice was different. This was backed up by the wider study.

“The vocalisation is an interesting thing,” says Maren. “The noises sounded different when she was outside, when all the cats that I've watched were outside, compared to when they were clearly addressing the vocalisations to the human.

“There have been studies showing that cat vocalisations sound slightly different when they're directed to the human. And there were also other behaviours that I thought were different.”

The cats roamed further away from home when they were on their own than they did when their human was around. Maren describes this as an observer effect - the effect that the animal behaves differently when a human is around than when it's on its own.

One of Maren’s students is now carrying out further work into the cats’ change in vocalisations as part of their final-year independent study project.

Maren and Treacle had a strong bond. She explains: “When I was in my garden, she was virtually not more than two to three metres away. She wasn't necessarily sitting on my lap but she was very close by and didn't go away, so she clearly tried to be close to me.

“But, when she was on her own, she happily went wherever. So, when I was not there, she behaved very differently. She would also happily sleep in the garden when I was around but she would not do that often when I was not around, so they were definitely differences in behaviour.”

Maren was intrigued to see the interactions between Treacle and the other cats that were caught on her collar camera. This ranged from a friendly greeting when the cats touched noses to staring contests and even fights.

“There was also this kind of subtle interaction where they were testing each other out without actually engaging,” says Maren. “So one cat was lying there, the other one was sitting on the wall and they were mostly not looking at each other but occasionally looking at each other. I think that is something very different to what you would see in dogs.

“I think the communication among dogs would be much more straightforward and more direct, and it can be direct among cats but I think they have this huge variety of very subtle interactions.”

As well as the further vocalisation study, the cat video footage will be analysed in more detail. Part of this will be to see if different behaviours can be connected to habitat types. “This includes indoors versus outdoors in general,” says Maren. “I think that is something I would like to explore more. To compare pure indoor cats and their behavioural repertoire in general and cats that can go indoors and outdoors.”

And Maren has been working with PhD student Hannah Lockwood who is studying the impact of domestic cats on British wildlife. Hannah is encouraging people to register their cats if they are outdoor cats and keep a diary of what they have killed. Some people will be offered a camera and a GPS tracker. You can sign up at www.whatthecatdraggedin.org.

Maren’s cat camera research began as a methodological study to see whether the footage could be used to determine behaviour. It is the further work, such as Hannah’s research, that will have more direct impact.

Cats are efficient predators and can cause havoc if they are introduced into parts of the world, such as remote islands, that have not adapted to predators. Even in areas such as Australia and New Zealand, where there hasn’t been a similar type of predator, they can change the balance of the ecosystem.

“In these countries, cats have been shown to even drive other species to extinction and that has led people to say, well, everywhere cats shouldn't be outside because they kill birds and so on,” says Maren.

The use of cat cameras should be able to give a more accurate measure of how many animals cats kill. But Hannah’s study will also look at cat density and bird density.

Maren explains: “Hannah has looked at some maps preliminarily and, funnily enough, for example, if you look at maps of the United Kingdom of cat density, which coincides very strongly with human densities essentially, London is full of cats along with Birmingham and Manchester and Liverpool.

“And so the cities are full of cats and then in the countryside there are much fewer cats per hectare. If you look at these cat density maps and you look at, for example, the house sparrow population density, it sort of coincides. So, where they have high human density equals high cat density, there are also high sparrow densities.

“Sparrows are in decline and it is a worrying thing. It might be naive but, if cats are impacting on a population, you would expect that the more cats are there, the higher impact. So, on a naive basis, and we have to look into that in more detail, you would expect that where you have high cat density you should have low bird densities, and not a positive correlation.

“So you would rather expect a negative correlation and that suggests at least to some extent that it is very likely that other factors are involved. The decline of insect diversity, habitat defragmentation, the intensification of agriculture, all these kinds of things, in my personal view, they are more likely candidates to be responsible for bird decline than cat density.”

Maren’s and Samantha’s study, The use of animal-borne cameras to video-track the behaviour of domestic cats, was published in Applied Animal Behaviour Science.