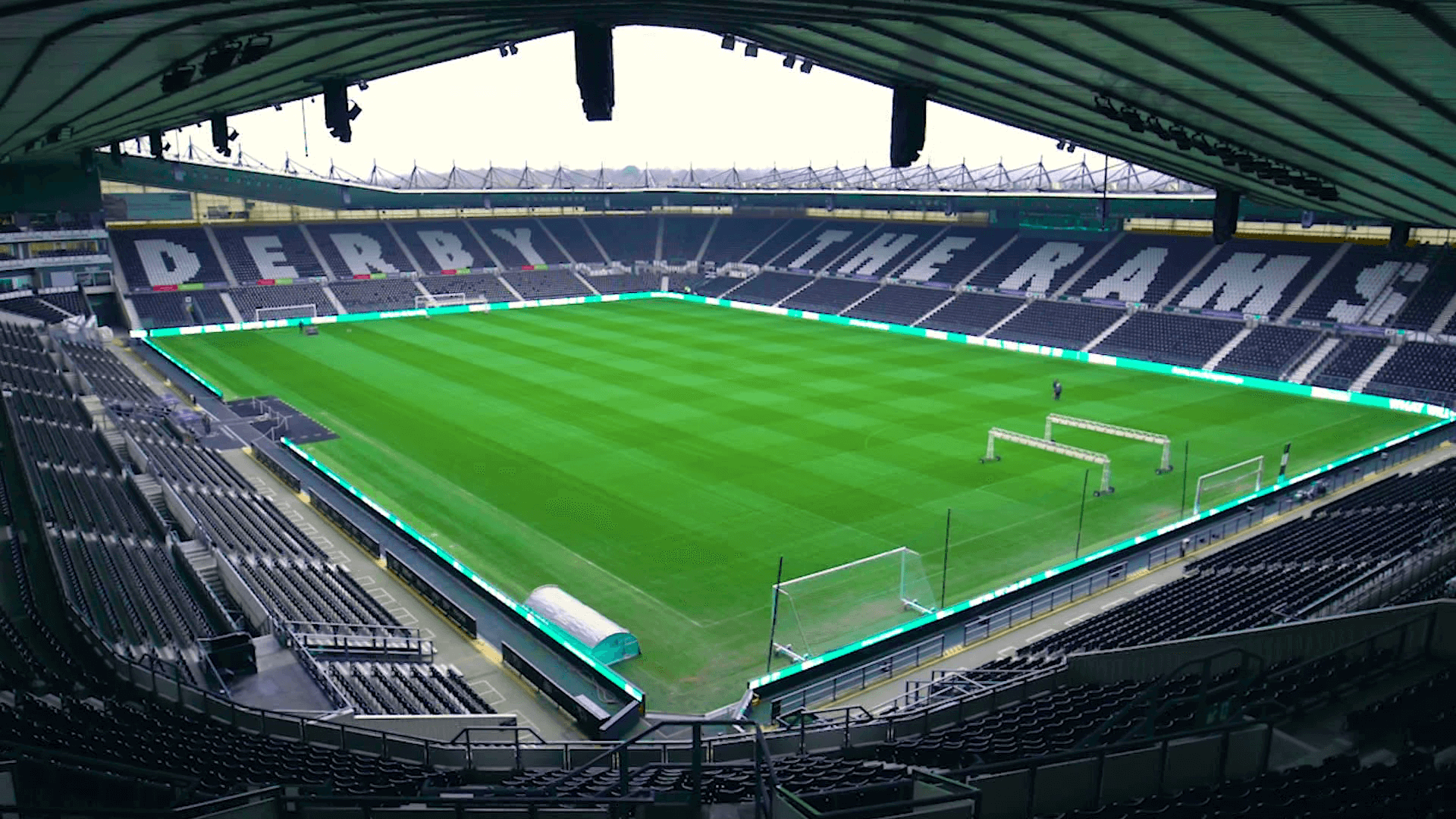 Working behind the scenes at a major football club

If your career ambitions begin with finding a way into the professional sports industry, we offer degrees that can take you there. And you could have your foot in the door within weeks of starting at the University.

Our BA (Hons) Sport Management course is quickly developing a reputation for producing work-ready graduates whose placement experience equips them with a variety of skills for roles in the industry. And our graduates Deivids Kravalis, Grace Vivian, Jack Lawrence, Jack Webster and Josh Cobb have all successfully joined Derby County Football Club shortly after completing the course.

An eye on the ball

“I’ve always loved and played sport,” says Deivids, who is now working as Senior Ticket Office Assistant. “I thought Sport Management was the perfect opportunity to see what happens behind the scenes.”

While studying, these students racked up hours of placement experience across key departments at Derby County, including Events, Sponsorship, Hospitality Marketing and Ticketing .

For many of them, the placements were what made them choose the course in the first place. Derby County Football Club is one of the organisations the University partners with to offer real-world learning. Others include the National Badminton League, Derby Arena, and Derbyshire Cricket Club. 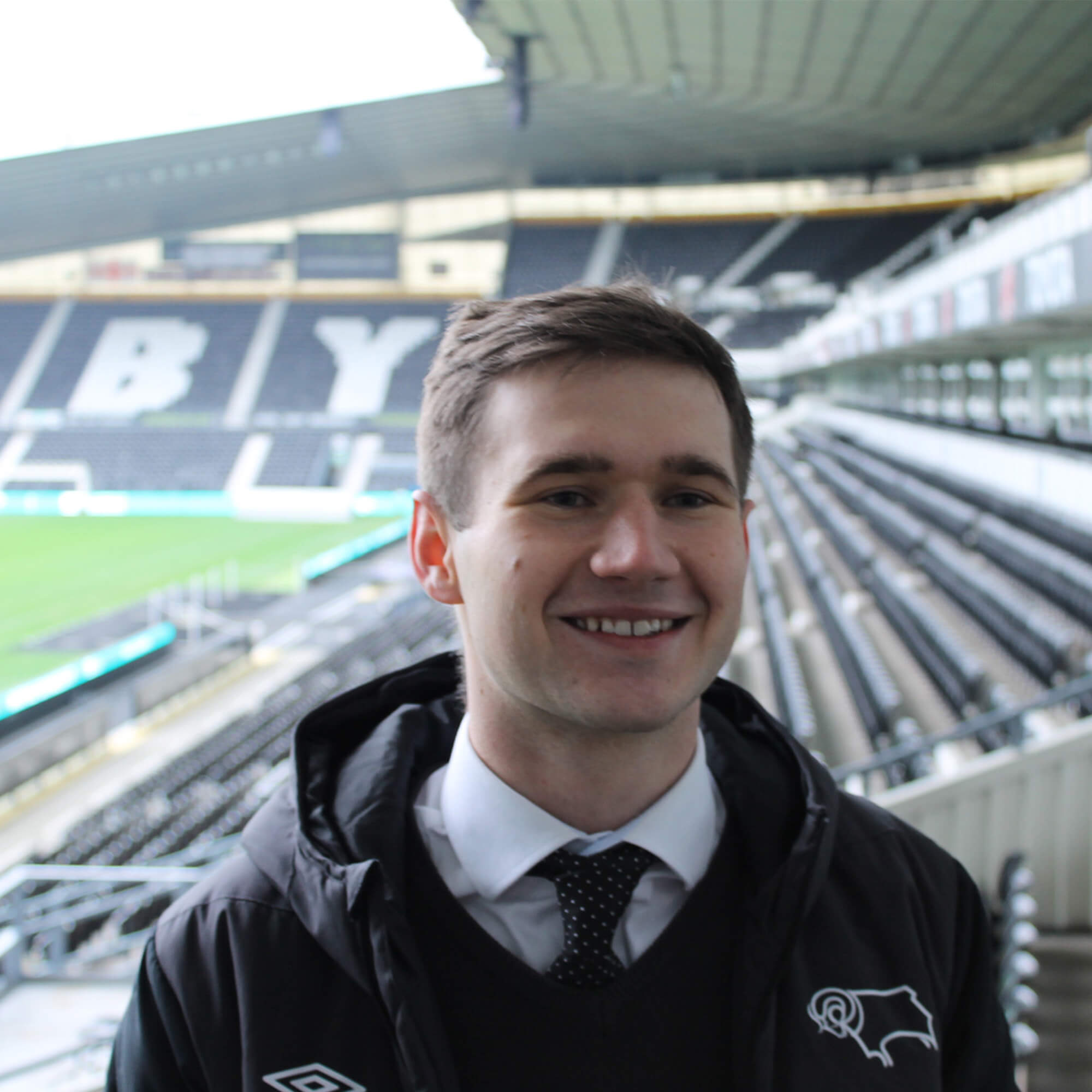 I knew the industry I wanted to go into was the business side of sport, and the degree provided me with not only the academic theory but also the placement opportunities that were required for a full-time position.

Being inspired and challenged

Inspired by the London 2012 Olympic games, Grace, now Events Executive and Supporter Liaison Officer, had volunteered for the Commonwealth Games while at sixth-form. She loved it, and set out a goal to organise sports events for a living.

She credits our teaching team with helping her realise this ambition. “I think, because the lecturers on my course were so experienced in their own field, they were able to challenge my opinions, my thoughts, and my end goal,” she says. “And question whether this was something that I really wanted to do, to provide lots of different answers. This helped me cement my idea that this was absolutely the career that I wanted to go into, and I’m forever grateful.”

Sport Management helps map out the different sorts of roles available across an entire industry, but also asks its students to consider business decisions from new perspectives they might not be familiar with.

“We did a lot of one-on-ones, challenging the way we were thinking because, often when you do things, you already have your own ideas” says Josh, Assistant Management Accountant. He credits the teaching team with challenging the students to push their work to the next level. 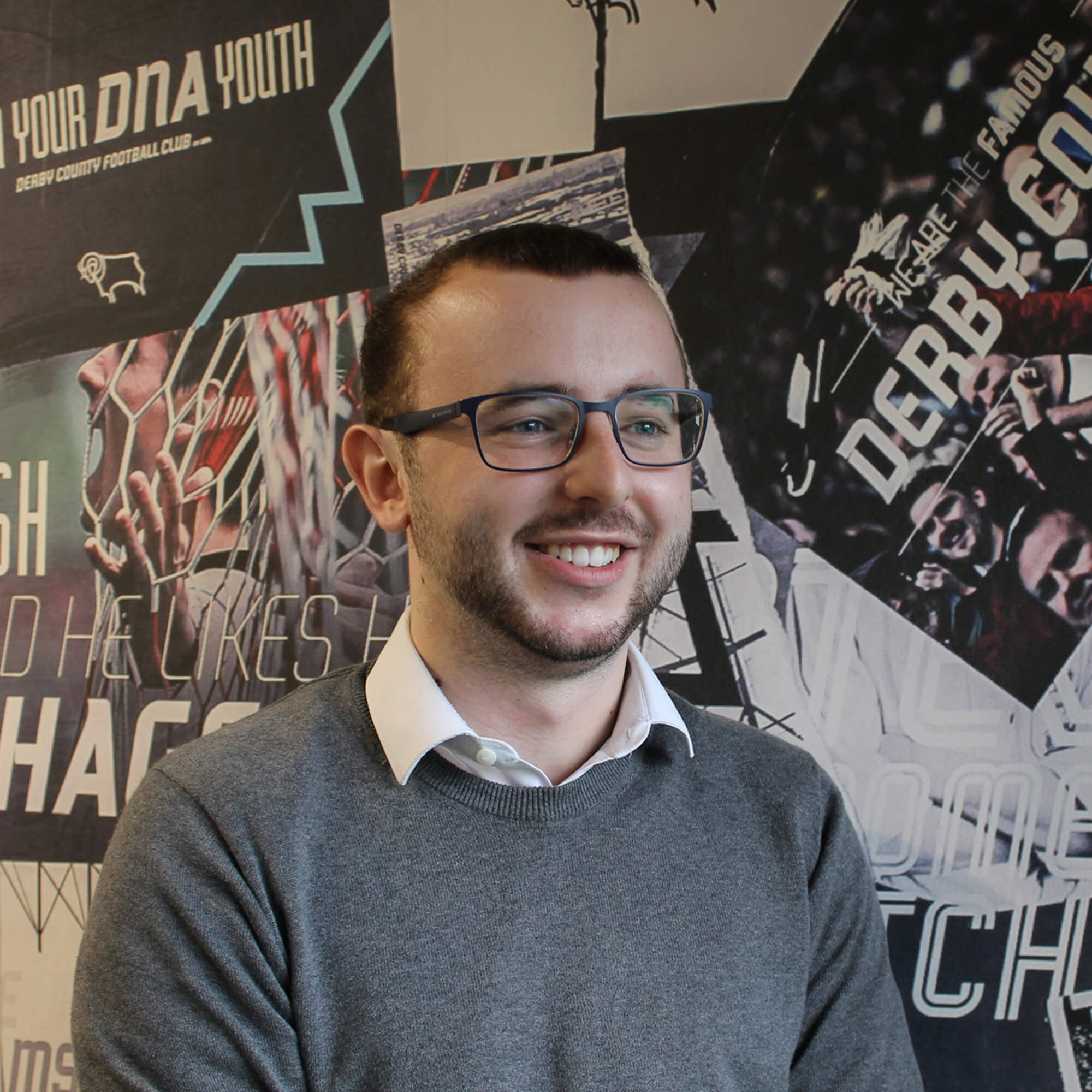 What the course really does is challenge you to think as a business and how you operate – financially, operationally, and why you do things.

Josh continues, “It’s a different way of thinking because you’re almost looking at it from the inside rather than the outside where you’ve been previously as a fan. When you only read about it on the BBC or Sky Sports, you build your own opinions and assumptions. The course opens your eyes quite a lot.”

Being a student gives you more than just insight on and access to national sporting organisations. It also trains you on the skills needed in professional working life. Everyone has a confidence that was nurtured during their time studying. Most attribute it to developing their presentation skills.

Jack Webster explains: “Presentations were something that initially people were scared of, whereas I think at the end of the third year it was something people looked forward to. They actually enjoyed telling people about what they’d learned, what they’d researched, so it’s definitely something that I don’t shy away from any more.”

Grace said that, when she was interviewed for her role, her interviewers remembered her from her time on placement and she was commended for the quality of the presentation she gave. “It set me ahead from the people that hadn’t got that knowledge,” she says. “I’m really glad that I was given the chance to prove what I’d learned at university, and that it was taken so positively in the workplace.”

Josh credits the resource of the Careers Hub as being another advantage while a student. He says: “When you go to interviews, the Careers team help you with interview techniques, your CV, public speaking, dealing with people, networking, how to get along – all that sort of stuff that you maybe don’t think about when you sign up for your degree, that’s outside of the scope of the syllabus. It’s really something that you value a lot when you come into the workplace – that side of things was just invaluable for me.”

Getting the ball rolling

With a variety of roles presented as options to sign up for, Sport Management students’ time on placement helps them gain useful insight in how a functioning business works.

Grace says: “It was really great to be able to jump straight in and actually see practical examples of what we were learning in the classroom. I think that it’s key because, if you can speak from your own experience, it’s much better than being able to recite what you’ve read in a textbook.” Grace says the experience helped them to grow. 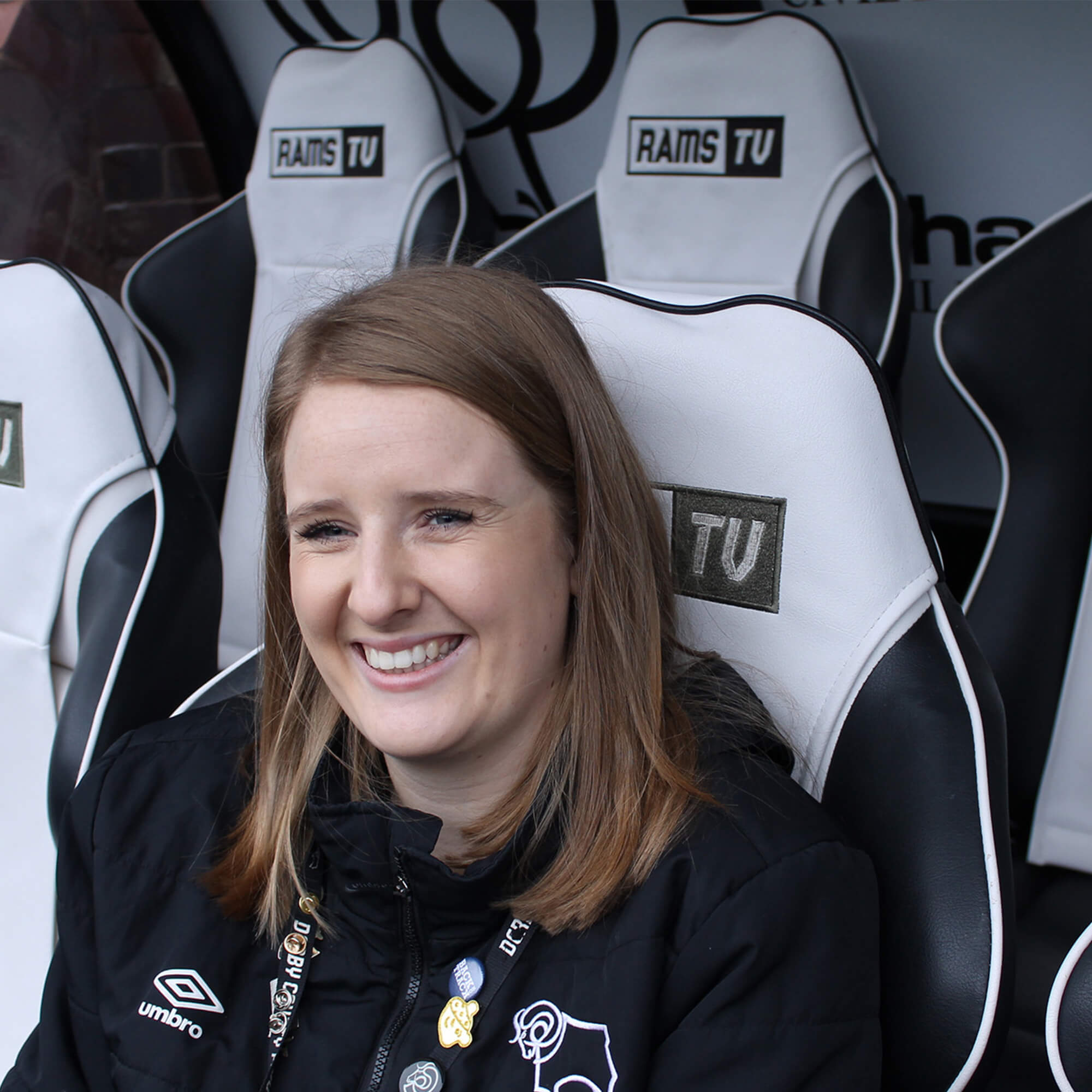 For Deivids, placements such as Stadium Control helped to provide context. He explains: “I wanted to see the different sides of football. We know the stadium capacity is 32-33,000, so it was interesting to see how they control the crowd, separate Away from Home fans, things like that.”

Jack Webster acknowledges the need to be ‘very self-motivated’ in order to capably balance the challenge that assignments, placements, and optional part-time work present. “Being able to juggle those three commitments definitely puts you in good stead for not only achieving well at university, but also in post-university life when looking for jobs,” he says.

Deivids credits the support of the teaching team and the wider University for his successes since graduating. 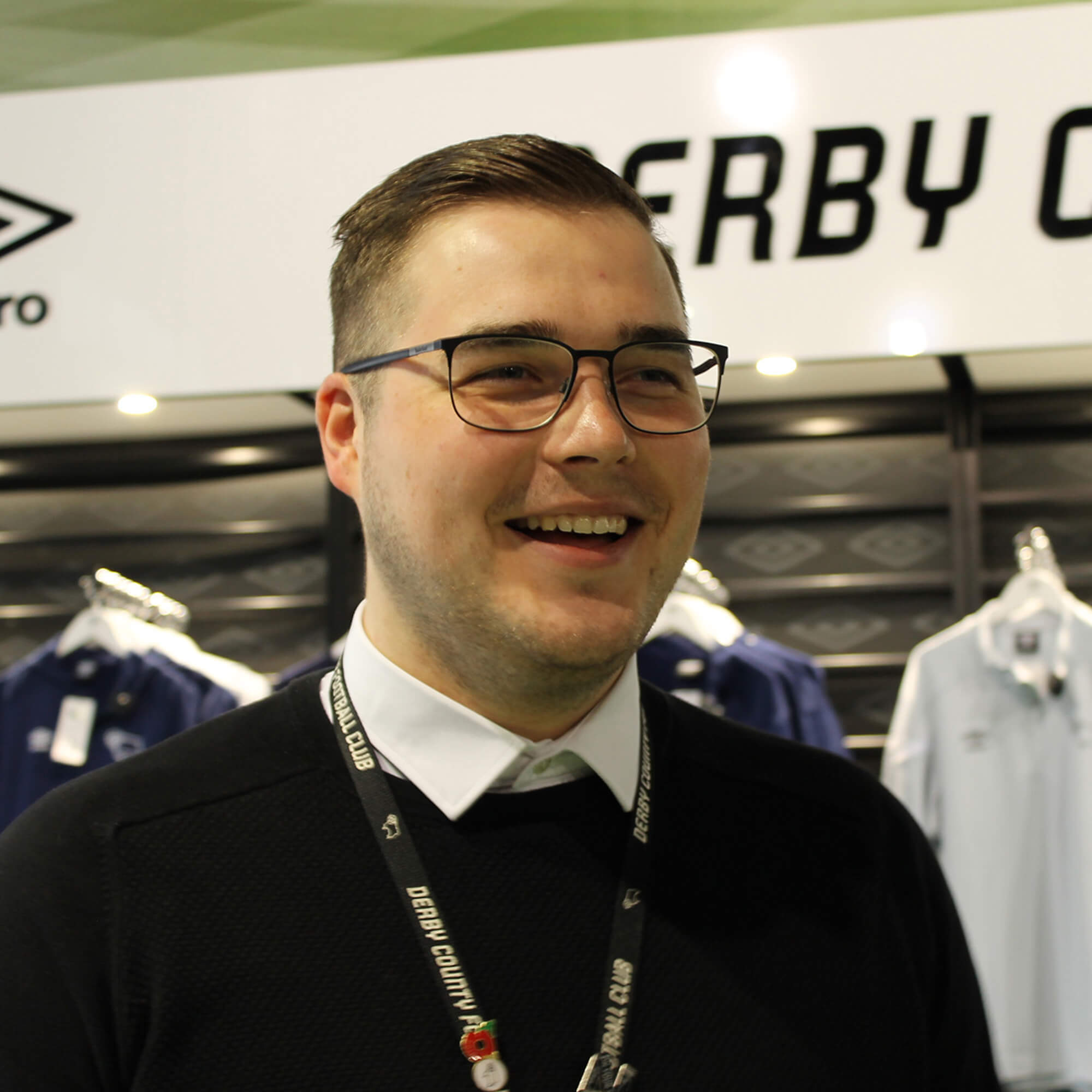 Even after I’ve graduated, they still send me emails just to follow up, saying hope all is well, or these jobs are available. So it’s great, you feel part of a bigger community.

And working at the football club has brought a new sense of community. He says: “When you see 30,000 people in the stands and that’s something you know you contributed towards, you just feel part of the team. Every single person that’s in this club has got their own sort of input, no matter whether it’s the directors, full-time staff at the ticket office, or the Megastore. Everyone’s got an input in this club and it’s a good experience.” 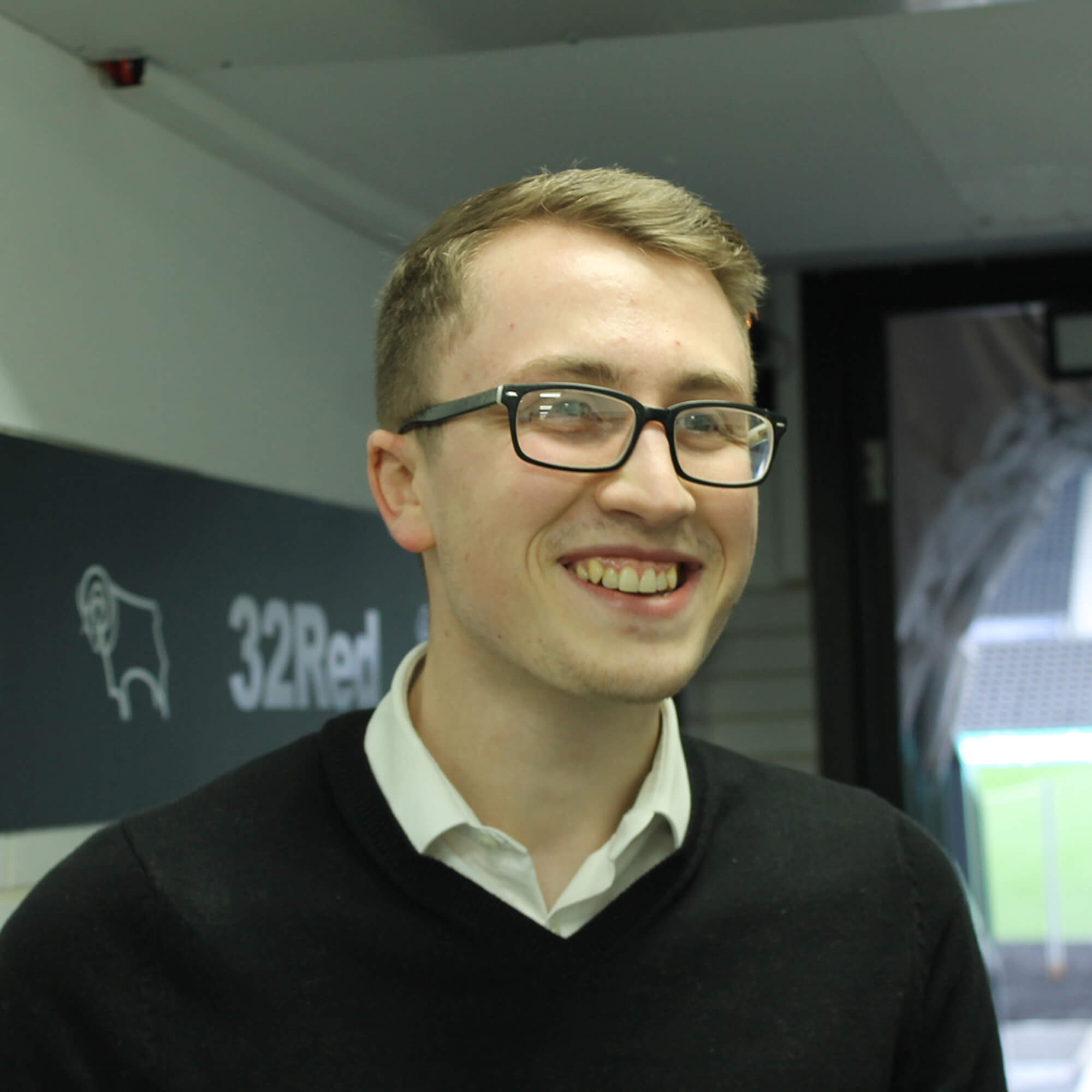 I never really saw myself working in football until I took on the Sport Management degree, and seeing that there’s more to it, there’s a lot of different departments and roles to do.

Jack Webster adds: “Football and sport is a growing industry and its growing at a vast scale. It’s something that I’m passionate about and hopefully something that I’ll be working in for the future."

Grace has a bright outlook for the future of her role. “My biggest success was getting my dream job,” she says. “It sounds really cliché, but this is what I wanted to do.”

Josh, who is now studying for his Chartered Institute of Management Accountants qualification, thinks he knows why they have all gone on to work for the club.

He explains: “You get given opportunities at university but it’s up to you to take them and make the most of them. And I think that’s one of the things we’ve all done and that’s why we’re still here. It’s because we took the opportunities, whether it was here or outside, made the most of them, made an impression, applied ourselves professionally, all that sort of stuff that you need to come in and make an impression. And its led to us getting full time employment at Derby County.”