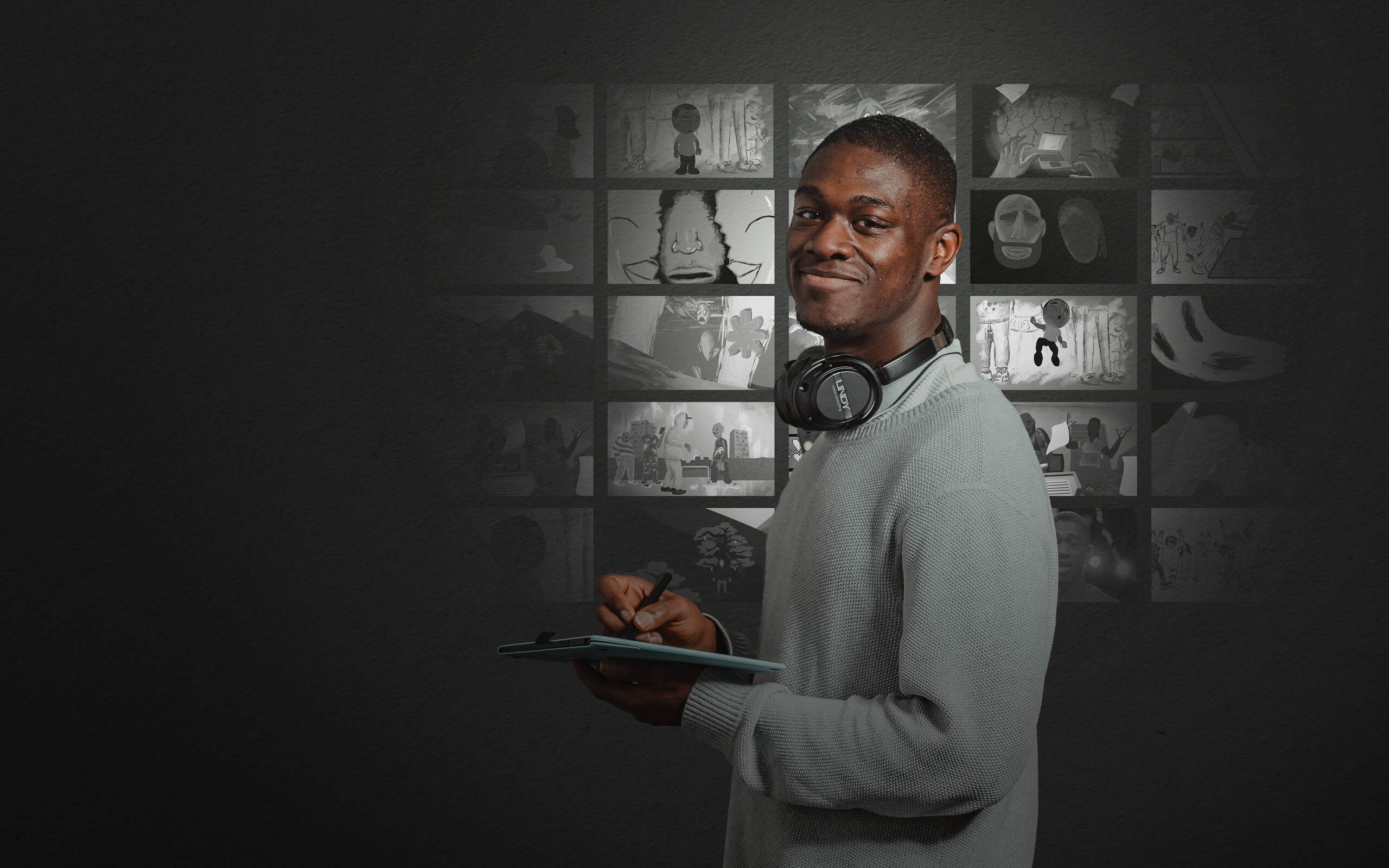 A force
for change

“Creating content that is a force for social change” is what excites Nathan Addai. Thanks to his studies at the University of Derby, and his own drive and determination, he’s finding innovative ways to get his message across.

Nathan’s ambition is to eventually set up his own studio and create an animated series. He takes his inspiration from black British animators including Jessica Ashman and Osbert Parker. “There’s not many in the industry,” he says, “And part of my studies has been discovering how I can bring about that change in terms of more black British people seeking opportunities in animation. In order to change the representation on-screen there has to be off-screen representation, especially in senior roles like producer, director, studio founder – that’s what I’m moving towards.”

Beyond animation, he also looks to figures like George the Poet and Akala – “poets/rappers, writers and campaigners who have a strong intellectual understanding but at the same time can speak the language of many young people today and bridge the gap between education and entertainment.”

Nathan studied BA (Hons) Animation followed by a masters at Derby, after transferring at the end of his first year from a university in London. Having lived near London all his life, he admits to being ‘pleasantly surprised by Derby.’ “The University has been a huge part in how much I’ve been able to settle here, because of the diversity of opportunities.”

Nathan strongly believes in grasping those opportunities. During his masters, he was selected for a commission from the BBC. “It was part of a scheme with Rural Media called New Creatives. Any 16 to 30 year old could submit a creative idea for a short film, audio drama or animation. My film is an animation called Mental Roots, and it’s about mental health in young black men. I also have a podcast with the same name. The film was released by the BBC in December.”

Being able to integrate his work on the commissioned film into his course was a major benefit: “At first it seemed to me that it had to be separate from my coursework, but after a few discussions with my tutors, I found that it was very much related.”

Based at Markeaton Street, home to the University’s creative community as well as science and technology students, Nathan had access to the full range of facilities and equipment on offer: “I’m maybe one of the most frequent and diverse users of the Markeaton Street facilities,” he says. “I use the Media Loan Hub to book out equipment like microphones for a song demo, and the Story Hub for podcasting. That’s got industry-standard radio recording equipment for Journalism students. The staff are very approachable, so I’ve been able to ask them for access to different rooms.

“I’ve also used the music recording rooms for some song demos and recordings for my own animation work, as well as the XR lab, which is mainly used by Computer Games Modelling and Animation students.”

He’s also found opportunities to apply his skills to practical projects at the University: “I’ve been working with the Library team recently to produce video content for their YouTube channel – that pushed my horizons because it was a challenge to create animated content in a much shorter space of time. I worked with an English student – she would do the script and the voiceover for the videos, and I would do the visuals. Being able to balance that project with finishing my degree made me realise that I’m capable of staying organised with different responsibilities.” 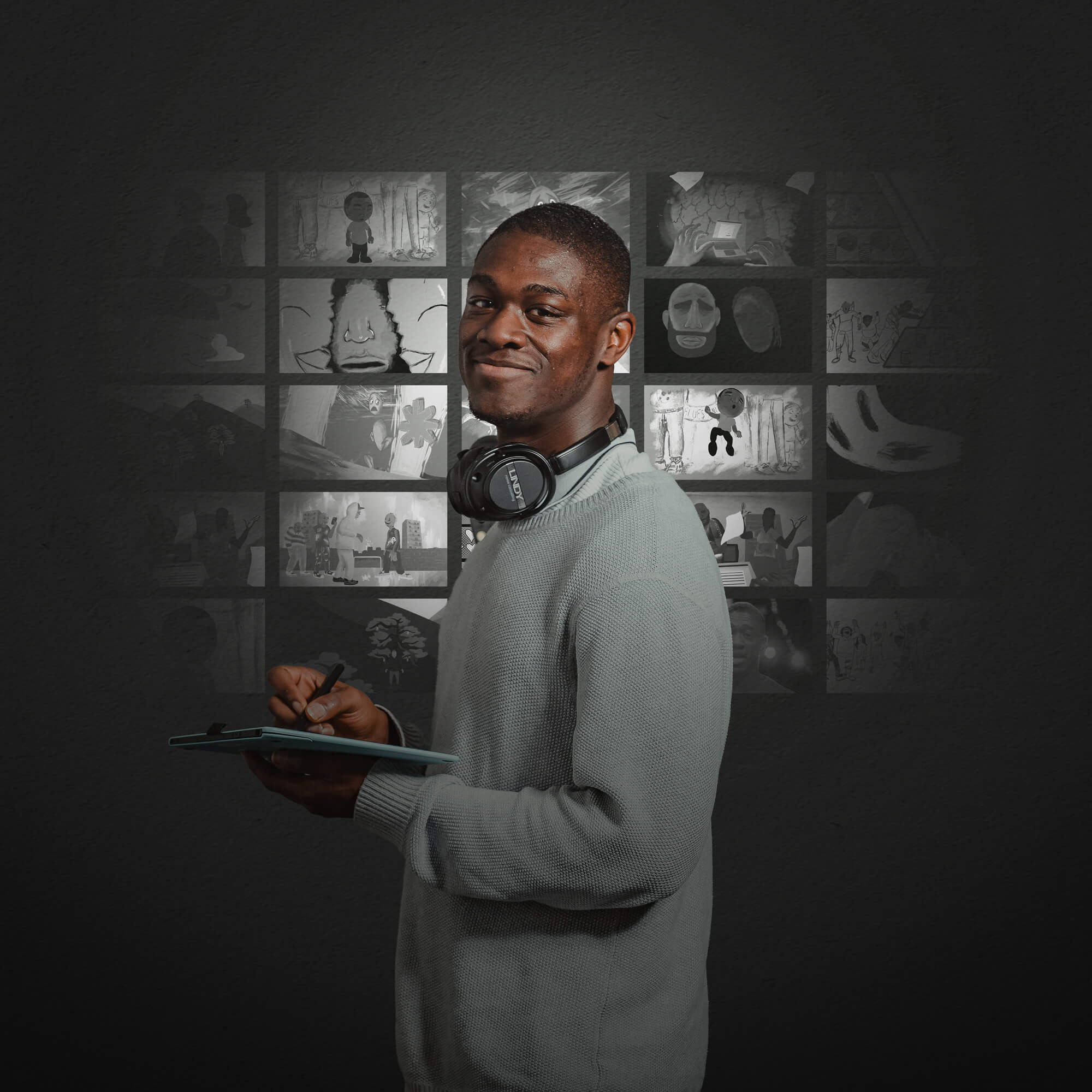 Through my masters I've learned to be an innovator rather than just a participant in the industry.

Rising to the challenge

Studying for a masters during the pandemic has been challenging, but Nathan believes that he has made the best of a difficult year: “What makes it worth it is the work that I’ve made – I’ve produced work that is true to my vision, true to who I want to be and the audience I want to reach. I’ve benefited from having the freedom to have my own self-led projects and to have tutors who understand that and have encouraged me to keep going.”